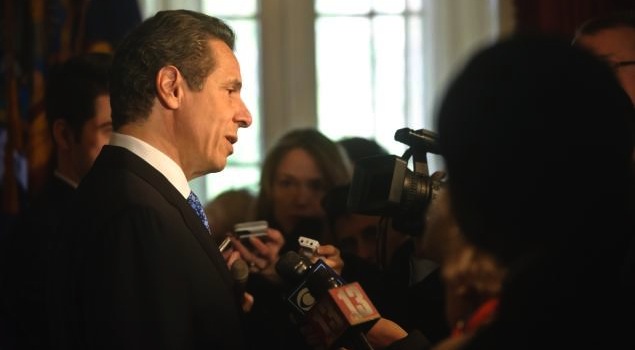 "New York will not stand idly by as the federal government's ineptitude takes food out of the mouths of New Yorkers," Governor Cuomo said. "This is just another example of the Trump administration's continued assault on the nation's most needy. While the federal government doles out a contract to an untested company using outdated technology, we will continue to protect not only our most vulnerable residents, but our hard-working farmers." (Photo: Eric Jenks)

ALBANY — Governor Andrew M. Cuomo today announced that New York State and the Farmers Market Federation of New York have reached an agreement with the mobile application vendor, Novo Dia Group, to enable Supplemental Nutrition Assistance Program recipients to continue to use their benefits at farmers’ markets across the state through the rest of the farmers’ market season. Earlier this month, Governor Cuomo issued a letter to U.S. Department of Agriculture Secretary Sonny Perdue urging federal action on this issue.

“New York will not stand idly by as the federal government’s ineptitude takes food out of the mouths of New Yorkers,”Governor Cuomo said. “This is just another example of the Trump administration’s continued assault on the nation’s most needy. While the federal government doles out a contract to an untested company using outdated technology, we will continue to protect not only our most vulnerable residents, but our hard-working farmers.”

Recently, the U.S. Department of Agriculture awarded the new contract that provides SNAP EBT equipment and services for farmers’ markets to a company that does not support mobile, cellular-based transactions, denying hundreds of thousands of needy families the opportunity to purchase fresh, nutritious, locally-grown fruits and vegetables.  With no replacement technology in place, and no foresight by the federal government to anticipate this situation, both farmers and SNAP beneficiaries would have suffered. The Novo Dia Group, which worked with the USDA to develop the cellular mobile technology that enables farmers’ markets to accept SNAP benefit cards for purchases, had indicated that they were no longer able to continue in business due to the lack of continued support from the USDA.

In addition, USDA failed to notify impacted states of this problem. Immediately after learning of this egregious oversight, New York State began to work with the Farmers Market Federation of NY and other impacted states to formulate a solution.

New York State’s short-term agreement with Novo Dia will provide uninterrupted access for SNAP recipients to continue to make purchases at farmers’ markets, while also benefiting our local farmers during their busiest season.  In light of the USDA’s failure to act, the New York State Department of Agriculture & Markets and the Office of Temporary and Disability Assistance will continue to work on a more permanent solution.

This agreement also lays the groundwork for other states that rely on cellular-based transactions at farmers’ markets to continue their services as well. Novo Dia serves over 1,700 farmers’ markets and farmers that accept SNAP nationwide. Forty-nine states and Washington DC will benefit from New York’s lead, despite the federal government’s actions disrupting service to low-income individuals and families who rely on SNAP assistance.

“Once again New York is leading the way to protect our citizens from a heartless federal government,” said Lieutenant Governor Kathy Hochul. “Thanks to the action we have taken, SNAP recipients will continue to enjoy access to fresh and healthy produce from farmer’s markets across New York.”

Office of Temporary and Disability Commissioner Samuel D. Roberts said, “Access to healthy and nutritious food is vital for our most vulnerable populations.  The ability for SNAP recipients to use their benefits at farmers markets is not only necessary, but a win-win for farmers and individuals alike.  I applaud the Governor for his action and leadership to ensuring there will be no interruptions.”

Department of Agriculture & Markets Commissioner Richard A. Ball said, “Thanks to Governor Cuomo’s quick action, New York is stepping in to ensure that its families can continue to use their SNAP benefits at farmers’ markets across the country and that our farmers maintain this critical avenue for sales and customer connections.  The possibility of any kind of disruption of service for those who rely on the electronic benefits service is not acceptable, and we will continue to work with OTDA, the Farmers Market Federation of NY and Novo Dia toward a long-term solution for our communities.”

Diane Eggert, Executive Director of the Farmers Market Federation of NY, said, “Losing access to SNAP through the Novo Dia Group would have been devastating to farmers’ markets. Low income consumers would lose access to fresh, healthy and locally grown foods, while our state’s farmers would have lost significant income that is critical to supporting our family farmers. We applaud Governor Cuomo’s quick action in shoring up Novo Dia Group for the remainder of the market season and making it possible for SNAP to be used at farmers’ markets. We also thank a team of partners within New York, as well as the National Association of Farmers Market Nutrition Programs for working hard to make this possible. This extension for Novo Dia Group will be used to find a permanent solution to maintaining Mobile Market Plus.”

Josh Wiles, President of the Novo Dia Group, said, “We would like to express our deepest gratitude to both the Farmer’s Market Federation of New York, as well as the State of New York. Their level of support and the speed in which they were able to put this partnership together has been extraordinary. This agreement allows not only New York Farmers’ Markets, but all users of Mobile Market+ nationwide, to continue operating without any service disruption.”

Phil Blalock, Executive Director of the National Association of Farmers Market Nutrition Programs, said, “We are grateful to New York for stepping up and fulfilling the next step in keeping this vital technology for farmers and markets. This is a great example of how such partnerships can be forged to support small farmers. We look forward to a sustainable, long-term solution in the coming months so markets and farmers will be able to continue to benefit from these services.”

The State has supported the implementation and use of Electronic Benefits Transfer for SNAP recipients at farmers markets since 2002.  Last year, New York processed $3.4 million through 221,051 transactions at 243 sites, providing healthy, nutritious food to nearly 60,000 New York households.

Under Governor Cuomo’s direction, New York had made tremendous progress to not only expand and improve SNAP usage at farmers markets, but also decrease operating costs, as: