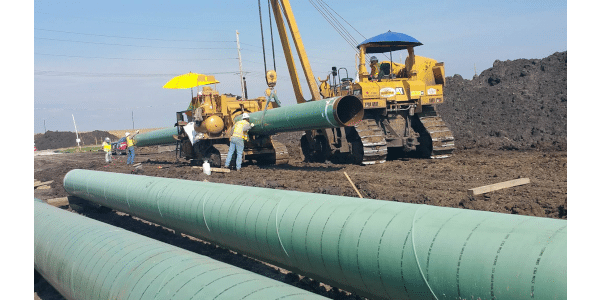 AMES, Iowa — An Iowa State University study looking at the impacts of soil disturbance and early remediation practices from construction of the Dakota Access Pipeline finds significant soil compaction and gradual recovery of crop yield in the right-of-way over five years.

The research funded by Dakota Access Pipeline (DAPL) aimed to investigate construction influences of the underground pipeline on farmland. The pipeline transports crude oil over 1,172 miles from North Dakota to Patoka, Illinois, passing through South Dakota and about 347 miles in Iowa. The study’s primary goal was to assess the extent of soil and cropping disturbances in the approximately 150-foot right-of-way caused by land clearing, topsoil removal and soil mixing, pipeline trenching and backfilling during the construction process.

Researchers also wanted to evaluate the effectiveness of state-mandated remediation requirements and a DAPL agricultural mitigation plan designed to minimize impacts to cropland. The Iowa Utility Code requires pipeline projects to remove topsoil and apply deep tillage to exposed subsoil before replacing the topsoil. The researchers are continuing to study the benefits of these practices, which can be costly.

Such field-based research quantifying soil properties and recovery in the years after a pipeline installation on farmlands is limited across the corn-soybean regions of the United States.

“Our findings show extensive soil disturbance from construction activities had adverse effects on soil physical properties, which come from mixing of topsoil and subsoil, as well as soil compaction from heavy machinery,” said Mehari Tekeste, assistant professor of agricultural and biosystems engineering, director of the Soil Machine Dynamics Laboratory at Iowa State and leader of the project.

After the local pipeline construction was completed in 2016, the researchers began studying the impacts of construction and reclamation on a short stretch where the pipeline crossed an Iowa State research farm near Ames, Iowa. They monitored soil characteristics like bulk density and chemical properties at different depths across three zones within the right-of-way and adjacent undisturbed crop fields. In 2017 and 2018, they analyzed yield data for corn and soybean plots planted on the reclaimed land in the pipeline right-of-way under two tillage systems (no-till and conventional tillage) and compared the yields to crops in the undisturbed fields with similar soils. A peer-reviewed article in the journal “Soil Use and Management” summarizes their early results.

“Overall, in the first two years, we found the construction caused severe subsoil compaction, impaired soil physical structure that can discourage root growth and reduce water infiltration in the right-of-way,” said Horton, the lead soil physicist on the project. They also found changes in available soil water and nutrients.

Though the heavy equipment-induced compaction was still evident two years after construction, a deep subsoil tillage treatment showed some benefit for alleviating the compaction.

The team found crop yields in the right-of-way were reduced by an average of 25% for soybeans and 15% for corn during the first and second crop seasons, compared to undisturbed fields.

“However, we have already started to see gradual recovery in yields from the soybean-corn rotation re-established in the right-of-way,” Ebrahimi said. “Also, results from our tillage comparisons suggest that use of no-till slightly improved corn production in the right-of-way zones, especially under the unfavorable weather conditions of 2020.”

The researchers are finalizing analyses from the subsequent years of the project. What they can say at this point is the compaction and yields are very slowly starting to recover. Ebrahimi has simulated the impacts of the soil compaction on crop yields over time using the Agricultural Production Systems sIMulator (APSIM). A publication on her results is in the process of review.

“We would like to continue this research — and especially collect more years of data on corn – and use it to provide recommendations for best management practices that can more effectively mitigate the impacts of future pipeline installation on crop yields,” Tekeste said.