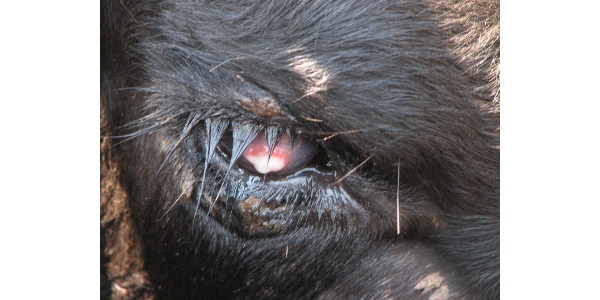 Teary eyes, redness around the eye's iris and squinting are among the symptoms of pinkeye. (Photo courtesy of Russ Daly, South Dakota State University Extension veterinarian)

“Pinkeye, or keratoconjunctivitis, is an infectious disease of cattle that costs producers money in several ways,” says Gerald Stokka, NDSU Extension veterinarian. “These include increased labor, cost of antibiotics, decreased weaning weights and decreased price paid at market for animals with scarred eyes.”

One study shows that calves affected with pinkeye in one eye weighed 35 pounds less at 260 days after weaning than noninfected calves in the same herd. Calves that were affected in both eyes weighed 47 pounds less.

Younger cattle usually are affected most often. However, adult cattle developing clinical signs suggests that the herd had not been exposed to the disease previously and does not have immunity to it, Stokka says.

Other risk factors contribute significantly to outbreaks of pinkeye. They include ultraviolet light; high fly numbers; environment conditions such as dust, wind, tall grass, weeds and pollen; co-infections with bacteria and viruses; close confinement of animals; and animals without pigment around their eyes. Nutrition also may play a role; inadequate vitamin A levels have contributed to the disease.

Symptoms of pinkeye include teary eyes, inflamed conjunctiva (reddened white-appearing area around the iris), squinting and aversion to bright light, and ulcerated corneas (those with holes in them), says Brett Webb, VDL director.

“The disease usually lasts for about three weeks, but it may take a month or longer,” Webb adds. “Healing leaves a scar on the cornea, which over time may eventually clear. Severe cases with ulcerated corneas may result in partial or total blindness of the affected eye.”

Commercial vaccines provide protection against only a few pathogenic strains; therefore, the vaccines will not be 100 percent effective against pinkeye, Stokka says. Vaccines can be made against these bacteria if the bacteria are isolated, but producers should consult with their veterinarian when considering whether to use such vaccines.

“Individual antibiotic treatment of bacterial pinkeye is usually successful,” Stokka notes. “In severe herd outbreaks, the entire herd may need antibiotic therapy, but all risk factors must be addressed to curtail new cases.”

Producers should contact their veterinarian or the VDL for more information.