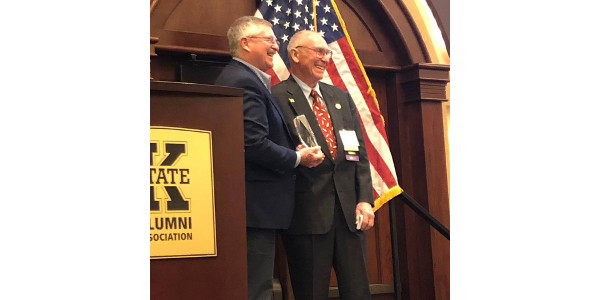 The Kansas Corn Impact Award was created to recognize Kansas leaders who embody the mission of Kansas Corn and have had an extraordinary impact on our state’s corn industry. 2019 is the second year for the awards. (Courtesy of Kansas Corn via Facebook)

Award recipient Roger Pine has been a corn leader on the local, state, national and international levels for over 30 years. Roger, his wife, Sue, and their children Brian and Shawn operated Pine Family Farms near Lawrence where, over the years, the family has grown several crops including corn, soybeans, potatoes and turf grass. Roger retired from the KCGA Board of Directors last year. He served as KCGA president from 1989 to 1992. Roger was a KCGA leader from the time of our modern organization’s birth and growth to seeing it evolve into the very active and respected group it is today. He served as the 1998/99 president of the National Corn Growers Association. In this role, he worked to remove barriers to international trade and advocated for a stronger safety net for growers in times of disaster or depressed crop prices. Roger served as a State Senator from 2005-2008 and was a strong advocate for agriculture in that role. Over the years, Roger and his family hosted countless trade delegations, foreign visitors and educational groups.

Award recipient Sharon Schwartz has long been a friend to Kansas corn growers through her work with the Kansas Pork Council and in the Kansas legislature. Sharon and her husband, Leo, have been active in many facets of Kansas agriculture on their farm near Washington. Over the years, she has been involved in dairy cattle, feeder pig facilities, a farrow to finish facility, as well as producing wheat, corn, soybeans, and sorghum on the family farm. Sharon was president of the Kansas Pork Producers Council and served two terms on the National Pork Board. She also served as a board member on the U.S. Meat Export Federation. Sharon served for 20 years in the Kansas House, recently retiring from the legislature, where she was a consistent and vocal voice for agriculture and for rural issues. She served as chair of the agriculture, appropriations, and rules and regulations committees, where she was a staunch ally for agriculture, defending farmers’ livelihoods against higher taxes and unnecessary regulation.

Simpson Farm demonstration at 3i SHOW