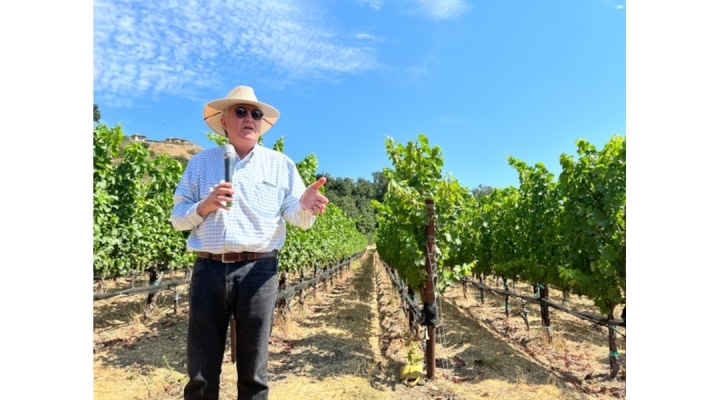 On July 29, Andy Walker, emeritus viticulture professor at UC Davis, discussed his success breeding for PD resistance, which produced five new grape varieties that were released in 2020. Pierce’s disease is caused by the bacterium Xyella fastidiosa, which kills plants by clogging their water-conducting system. Glassy-winged sharpshooters spread the bacteria, which can also move vine to vine.

“Most of what you’ve heard is true about Pierce’s disease. But in reality, when you see symptoms, and they are distinctive and consistent, those vines are dead. And if they’re not dead then, they will be very soon,” said Walker.

Unfortunately, PD cannot be resolved with the use of insecticides alone because PD is transmitted by vectors that often live in nearby wooded areas and landscapes. The “obvious solution,” as Walker puts it, is resistance.

But the downside of breeding for resistance is twofold: the species you need for PD resistance are “not very good and have a lot of faults” and grape breeding takes too long.

Walker persevered and discovered that Vitis arizonica located in Northern Mexico has high resistance and does extremely well against PD. Many American grapes have strong flavors that some find incompatible with fine wine. The classic is the “foxy” flavor of concord grapes. V. arizonica, however, has fruit characteristics that are relatively neutral.

After producing about 5,000 seedlings over several years of crosses, Walker and his team began screening for features such as size and color with high resistance being top priority.

When learning about this breakthrough, Tolmach jumped at the opportunity to grow Walker’s varieties.

“I’m growing these for my own personal pleasure, and it’s been a really fun project because you’re taking something that you don’t have any idea what the quality is going to be like,” said Tolmach.

Tolmach admits to having challenges growing the plants. “We spent an excessive amount of time thinning the vines,” he said. “I fumbled a little bit at times and had not been completely happy, but each year made a teeny tiny bit of progress.”

Despite not knowing what to expect, Tolmach was shocked when he realized how good the wines are, referring to them as “worthy and special.”

“People expect hybrids not to be good,” he said. “They taste different, but they are an example of what exist beyond cabernet and chardonnay. People are interested in the obscure and environmentally more sound.”

The Ojai Vineyard is in their fifth year of growing Walker’s varieties and Tolmach appreciates that they can be grown without the use of insecticides.

“It’s unusual to have a vineyard that is so healthy, and these vines are happy,” he said.

Walker and Tolmach hope to reassure growers and winemakers that these varieties are worth the investment and encourage them to champion this message.

“The biggest problem is getting [winemakers] to spread information to consumers and convincing them to try [the wine],” explained Walker.

During a past wine tasting, Tolmach shared that a group of visitors including wine experts mistook the wine that Tolmach presented as syrah – the varietal Tolmach is known for. In fact, the wine was Walker’s paseante noir.

It was a testament to the quality of these varietals, according to Tolmach.

All five varieties with high PD resistance are currently available at most nurseries in California including Novavine, Sunridge and Wonderful nurseries.