Home » Physics and psychology of cats – an (improbable) conversation 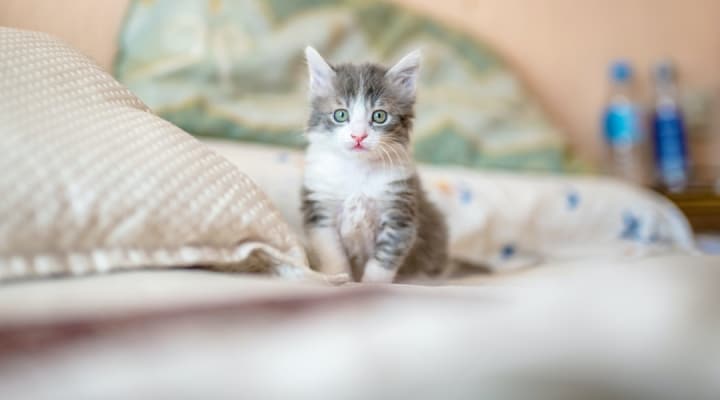 WASHINGTON — Have you wondered why cats are so nimble and seem to fit perfectly in cups, boxes and other small places? Or how cats communicate with humans?

Marc Abrahams, editor of the Annals of Improbable Research and master of ceremonies of the annual Ig Nobel Prize, Jean Berko Gleason, psycholinguist and professor emerita of Psychological and Brain Science at Boston University, and Marc-Antoine Fardin, rheology researcher at the University of Paris, discussed this and other cat science questions, probable and improbable, in a fascinating and humorous webinar co-hosted by The Conversation and the Annals of Improbable Research.

Fardin is the winner of the Ig Nobel Prize in physics in 2017 for exploring the use of fluid dynamics to probe the question “Can a cat be both solid and a liquid?”

Below are some highlights from the discussion. Please note that answers have been edited for brevity and clarity.

Marc Abrahams: Rheology is studying anything, everything that flows, and, thanks to you, largely, that now includes cats. How did that happen?

If you look at a bunch of different cats, there are many different pictures and experiments that have been run by many people around the world where you see the cats taking the shape of the container [they are in], like a box or a sink. People were asking this question. And so I took this question and put it into the modern lingo of rheology.

Marc Abrahams: What does the compressibility of cats refer to?

Marc-Antoine Fardin: Gas in comparison to liquid is compressible. So it means that if you were to push it, you could change its volume. And so for cats, once you answer that the cat might be a liquid, you might also push the question a little further and ask if in some cases a cat could be a gas. And so if it is a gas, it should be compressible. And that’s an experiment that I have not done because I don’t want to get into any trouble.

Beth Daley (to Jean Berko Gleason): Based on your expertise as a psycholinguist, have humans been communicating efficiently with cats? And if not, how should they?

Jean Berko Gleason: Cats have been communicating very efficiently with us. We’ve had cats as pets for, like, 14,000 years. And in 14,000 years, the cats have told us that they want to live with us, and that they would like a comfortable bed, and they want food, and they want us to snuggle with them. In other words, the cats have really communicated all of their interests and needs such that we’re running around doing whatever they have in mind. So they’re doing a very good job.

Our problem with communicating with cats is that you can try to train cats, but [they are very stubborn]. For instance, cats who take part in psychology studies frequently … just leave. The cats do not hang around for the rest of your study.

What people are trying to do really is learn much more about their body language. One of the things that has happened in recent years is that we [have] begun to understand that cats have different facial expressions. And there [are] some bits of research recently in which veterinarians, or people who work in cat hospitals, they’re able to tell the five or six cat facial expressions apart, but we’re not terribly good at that.

Watch the full webinar to hear about additional science behind Fardin’s study on the physics of cats, Berko Gleason’s famous research on children’s language-learning abilities and more.

Cat becomes celebrity after sneaking into her family's car and joining their road trip
August 11, 2022