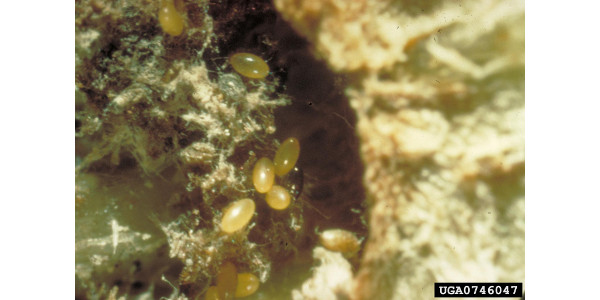 BROOMFIELD, Colo. — In November 2016, the Colorado Department announced that an insect capable of damaging Colorado’s wine grape crop was confirmed in Mesa County; since then, an additional three vineyards have tested positive for the insect. US Department of Agriculture’s Agricultural Research Service entomologists identified grapevine phylloxera (Daktulosphaira vitifoliae) on Vitis vinifera grapevines in the Grand Valley American Viticultural Area (AVA), which is a federally designated grape production area in western Colorado.

In its full life cycle, phylloxera can take multiple forms. The most serious and damaging form, which was recently discovered in Mesa county, feeds on roots of grape plants. It can damage the plant by disrupting water and nutrient flow. Initially, infested plants appear weakened, stunted, and with leaves lighter in color which may look like they are suffering from a nutrient deficiency. In addition, phylloxera can live out another stage of its life on grapevine leaves. This less serious form feeds on leaves that causes leaf galls to develop, but generally not on V. vinifera.

“Our priority right now is to continue surveying vineyards to see how widespread this infestation is and to encourage Colorado’s grape growers to practice biosecurity methods that can help protect their crop,” said Laura Pottorff, CDA’s Nursery and Phytosanitary program manager.

The main mechanism of phylloxera spread over long distances is on grape nursery stock.  Therefore, the Colorado Department of Agriculture is urging vineyard operators to contact their supplying nurseries to find out what, if any, procedures they have in place for identifying and stopping the spread of phylloxera. Colorado grape growers should also take the following precautions:

“Phylloxera is found throughout the United States. It has also been present throughout Europe since the 19th Century as well as in California since the early 20th Century.  Although its discovery will cause our grape-growers to adopt new biosecurity measures to limit its spread and impact, Colorado will continue to produce world-class wines just as they continue to do in Europe and California,” said Doug Caskey, Colorado Department of Agriculture’s Executive Director for the CWIDB.

Background
Colorado has approximately 150 grape growers tending 1,000 acres of vineyards and more than 140 licensed commercial wineries.  These vintners produced 166,000 cases of wine during the 2016 fiscal year, which equaled more than $33 million in sales.

Phylloxera is native to the eastern and southeastern United States, where native American grape species (such as Vitis riparia and Vitis labrusca) co-evolved with the insect. Though it has spread around the world since the mid-19th Century to many other wine regions, prior surveys found no evidence of phylloxera in Colorado’s commercial vineyards. Grape species native to the U.S. are generally resistant to phylloxera, but V. viniferavines have no natural resistance whatsoever.  This is why phylloxera nearly wiped out all the vineyards in Europe once it survived the trans-Atlantic trip in the mid-19th Century. On V. vinifera grape cultivars, phylloxera normally infests only the underground parts of the plant and eventually kills the vine. The leaf-feeding, gall-producing form is not present. In susceptible American Vitis species and hybrids, the full life cycle occurs, including the leaf-galling form. Colorado had been one of the few wine regions worldwide to not have been affected by phylloxera and as such many grapevines are self-rooted on V. vinifera rootstocks.