Home / New Jersey / Phillip Alampi Beneficial Insect Laboratory receives funding
A new user experience is coming! We'll be asking you to login to your Morning Ag Clips account March 1st to access these new features.
We can't wait to share them with you! Read more here. 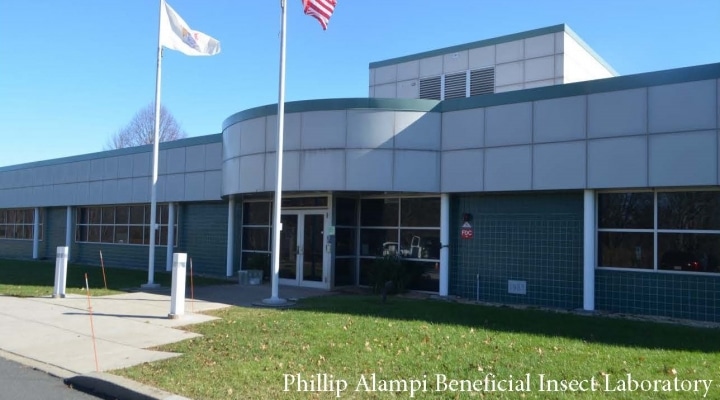 New Jersey Department of Agriculture Secretary Douglas Fisher announced today that the Phillip Alampi Beneficial Insect Laboratory (PABIL) has received $4.2 million in funding from the Board of Public Utilities State Facilities Initiative to receive important upgrades to the facility that opened in 1985. (photo provided)

TRENTON, N.J. – New Jersey Department of Agriculture Secretary Douglas Fisher announced today that the Phillip Alampi Beneficial Insect Laboratory (PABIL) has received $4.2 million in funding from the Board of Public Utilities State Facilities Initiative to receive important upgrades to the facility that opened in 1985.

The top priority will be to renovate the lab’s HVAC system. Of the 33 temperature-controlled rooms, as many as 18 had been unusable. The funds will also go toward making major repairs to the HVAC system and to upgrade the greenhouse control systems.

“This funding will allow for essential upgrades to the laboratory so staff can continue the outstanding work it has provided for decades,” Fisher said. “This is one of the few state government labs of this type in the United States that rears beneficial insects. The lab produces environmentally friendly solutions for control of invasive pests while saving millions of dollars by restricting the use of pesticides.”

Some of the PABIL programs that have helped New Jerseyans and others across country include the Mexican Bean Beetle program, which has allowed farmers and gardeners to not apply pesticides to control the beetle since 1985; the Mile-a-Minute program, where a weevil is released to defoliate the weed that can grow as much as six inches a day, choking out trees and other vegetation; and the Purple Loosestrife Program, where small beetles were released to invasive wetlands as the weed changes the wetlands environment essential to native wildlife. In all, these programs and others are estimated to have saved hundreds of millions of dollars that would have been spent if other treatment methods were conducted.

“The State of New Jersey is leading by example by encouraging energy efficiency projects within our own agencies and facilities,” said NJBPU President Joseph L. Fiordaliso. “Reducing energy use will not only save money, but it is an extremely important component of our efforts to achieve Governor Murphy’s goal of 100 percent clean energy by 2050 along with offshore wind, expanded solar and encouraging the use of electric vehicles. I’m thrilled that our partners at the Department of Agriculture are joining in this effort through our State Facilities Initiative.”

PABIL is a 21,000 square-foot laboratory designed for biological pest control. It allows state entomologists to develop insect rearing techniques and mass produce beneficial insects to be used to help reduce insect and weed populations below damaging economic levels. The Department’s Division of Plant Industry simultaneously mass produces a variety of beneficial insects for control of many different species of pest insects and weeds.

The laboratory’s 11,000 square-foot center section features 30 environmentally controlled insect rearing rooms with the ability to regulate temperature, humidity, and photo period to simulate any season or time of day. Most of the rooms are used for development and implementation of biological control programs. Diet preparation rooms are equipped to mix large volumes of artificial diets and food supplements on which insects thrive.

The greenhouses propagate plants required to produce host insects that are reared for the Department’s biological control programs. When in full working order, the greenhouse space totals more than 5,000 square feet and is equipped with lighting to resemble natural light and automatic controls to regulate temperature and air movement.

Adjacent to the laboratory is a one-acre plot used to develop and field test pest control strategies and to maintain field insectaries to facilitate redistribution and establishment of beneficial insects.