Home » Philadelphia: A Hub for Horticulture since Early American Times 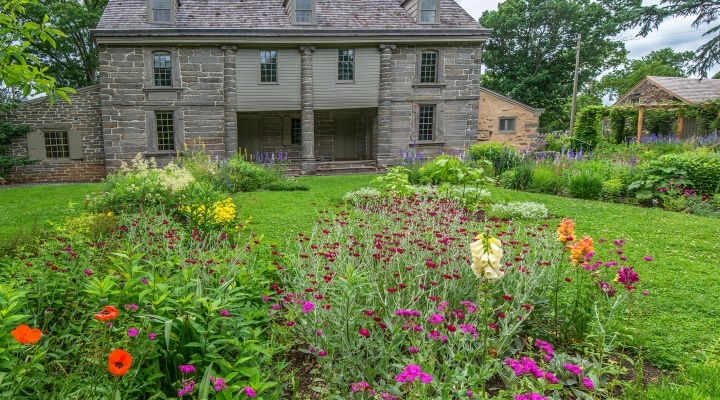 From the days of John and William Bartram and Humphry Marshall to Longwood Gardens and the Pennsylvania Horticulture Society, Philadelphia has been a center for horticulture in the United States.  John Bartram and his partners in England helped to revolutionize the English garden with new species from North America.  William Bartram travelled further into the continent including North and South Carolina, Georgia, Florida, Alabama, Mississippi, Louisiana, and Tennessee.  Humphry Marshall, a cousin of the Bartrams is best known for his 1788 publication Arbustrum Americanum, which was the first formal scientific description of trees and shrubs of North America. (photos provided)

PHILADELPHIA — From the days of John and William Bartram and Humphry Marshall to Longwood Gardens and the Pennsylvania Horticulture Society, Philadelphia has been a center for horticulture in the United States.  John Bartram and his partners in England helped to revolutionize the English garden with new species from North America.  William Bartram travelled further into the continent including North and South Carolina, Georgia, Florida, Alabama, Mississippi, Louisiana, and Tennessee.  Humphry Marshall, a cousin of the Bartrams is best known for his 1788 publication Arbustrum Americanum, which was the first formal scientific description of trees and shrubs of North America.

Over the centuries, horticulture flourished in the Delaware Valley in the form of public gardens and a thriving horticulture industry.  Horticulture training programs in high schools and colleges grew with many secondary and post-secondary programs.  They, however, are having difficulty attracting interested students these days even though the industry still thrives.

Paul Redman, President of Longwood Gardens, and Matt Rader, President of the PA Horticulture Society join us at Bartram’s Gardens for presentations, lunch, and a tour with Historian Joel Fry.

Joel T. Fry has been Curator at Bartram’s Garden, the home of John and William Bartram, since 1992. He studied anthropology, historical archaeology, and American Civilization at the University of Pennsylvania and specializes in garden archaeology and garden history. He has completed numerous articles on the history of Bartram’s Garden and the Bartram family plant collections.

Matt Rader is the 37th President of the Pennsylvania Horticultural Society. He is focused on deepening and expanding PHS’s efforts to use horticulture to advance the health and well-being of the communities in the Greater Philadelphia region and beyond.

Gardens and landscapes have shaped Matt’s life. He has lived and worked in magnificent landscapes from the mountains of south central Pennsylvania to Stowe Landscape Garden, the University of Virginia, Monticello, and Fairmount Park. He combines a passion for horticulture with a deep love for historic preservation and cities.

Paul B. Redman is an award-winning leader of public gardens, known for his dedication to the beauty and sustainability of gardens, and to the training of future generations of horticulture professionals. A hallmark of Paul’s leadership is building a culture of planning to propel a shared vision forward.

Over the last 12 years, Paul has implemented institutional and strategic reforms that have positioned the Gardens as a premier horticultural, cultural, and educational institution of the 21st Century, while respecting the values of its founder, Pierre S. du Pont. The result has been nothing short of astounding with overall attendance doubling to almost 1.6 million visitors per year; an incredible climb in Membership support from 17,000 to 66,000 households; and earned income that has almost tripled. Most recently and notably, Paul led one of largest projects in Longwood’s history: the $90-plus million revitalization of the Main Fountain Garden, which reopened in May 2017.

Bartram’s Garden is a historic garden and arboretum in Philadelphia, Pennsylvania. Founded in 1728 by botanist John Bartram (1699–1777), it is the oldest surviving botanical garden in North America. Covering 46 acres (19 ha) with an 8-acre (3.2 ha) arboretum, the garden is near the intersection of 54th Street and Lindbergh Boulevard on the west bank of the Schuylkill River.

Its John Bowman Bartram Special Collections Library contains a vast collection of documents and materials related to the history of the Garden, the history of Philadelphia, and the development of the field of botany. The non-profit John Bartram Association operates the Garden in cooperation with the Philadelphia Department of Parks & Recreation. It was designated a National Historic Landmark in 1960.

Longwood Gardens is an American botanical garden. It consists of over 1,077 acres (436 hectares; 4.36 km²) of gardens, woodlands, and meadows in Kennett Square, Pennsylvania, United States in the Brandywine Creek Valley. It is one of the premier horticultural display gardens in the United States and is open to visitors year-round to enjoy native and exotic plants and horticulture (both indoor and outdoor), events and performances, seasonal and themed attractions, as well as educational lectures, courses, and workshops.

Today the 1,077-acre Longwood Gardens consists of varied outdoor gardens, ranging from formal to naturalistic in their landscape design, and 20 indoor gardens within a 4.5 acre (1.8 hectares) group of heated greenhouses. Longwood’s Conservatory contains 4,600 different types of plants and trees, as well as fountains. The Gardens also has extensive educational programs including a tuition-free two-year school of professional horticulture, a graduate program, and extensive internships. It hosts hundreds of horticultural and performing arts events each year, from flower shows, gardening demonstrations, courses, and children’s programs to concerts, organ and carillon recitals, musical theatre, fountain shows, and fireworks displays. It also hosts an extensive Christmas light display during the holiday season.

The Pennsylvania Horticulture Society uses horticulture to advance the health and well-being of the Greater Philadelphia Region.  As an organization, it believes in the power of horticulture to make positive social and environmental change. As a community, we invest our time, passion, money, and gardens in our cause.

PHS was founded in 1827. The PHS Philadelphia Flower Show sponsored by PHS is the nation’s largest and longest-running horticultural event and features stunning displays by the world’s premier floral and landscape designers.

While many things have changed for us over time, our main focus has not wavered.

In 2019, PHS adopted Vision 2027, a new strategy that fully commits PHS to using horticulture to advance the health and well-being of the Greater Philadelphia region. Driven by a diverse community of more than 300,000 supporters, volunteers, and gardeners, PHS uses all its activities to advance four impact priorities:

Redding to hit the road in Pa., tour urban gardens