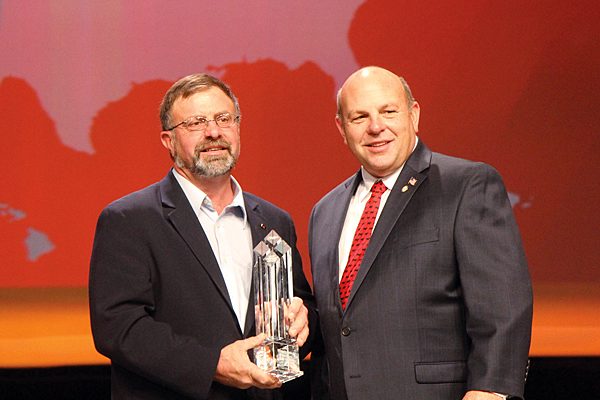 PHOENIX — Pennsylvania Farm Bureau has been recognized with 11 national awards for its overall achievements in 2016, including the prestigious Pinnacle Award, during the American Farm Bureau Federation’s 98th Annual Meeting in Phoenix.

The Pinnacle Award is the highest award a state Farm Bureau can earn for program and membership achievement.

In addition, PFB received “President’s Awards” in three program areas, including Leadership Development, Member Benefits and Membership Initiatives. The President’s Award for each program area is presented to state Farm Bureaus that have reached membership goal and achieved the highest score among peer group states that earned an Excellence Award.

“It takes a huge team effort to reach the level of success we achieved in 2016,” said PFB President Rick Ebert. “The awards shine a light on the hard work and dedication of our grassroots farmer volunteers and organization staff to address pressing issues affecting agriculture and farm families across Pennsylvania.”

Farmers from Pennsylvania and across the United States gathered in Phoenix from Jan. 6-11 to participate in AFBF’s Annual Meeting to set new federal policies for the nation’s largest farm organization.

Pennsylvania Farm Bureau is the state’s largest farm organization with a volunteer membership of nearly 62,000 farm and rural families, representing farms of every size and commodity across Pennsylvania.