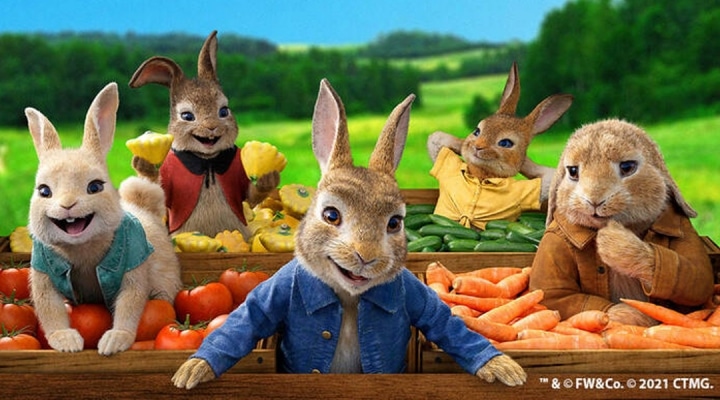 ROME — Peter Rabbit has joined forces with the United Nations (UN), the UN Food and Agriculture Organization (FAO) and the UN Foundation to enlist more food heroes, like Peter, who see the value in fruits and vegetables for a balanced diet and a healthier planet.

Peter and his friends from Sony Pictures’ PETER RABBIT 2: THE RUNAWAY are joining the awareness-raising campaign that asks us all to be food heroes. That means each of us being mindful to eat plenty of fiber-rich fruits and vegetables, locally sourced and in season where possible, reducing food waste, and planting our own gardens, however small.

“FAO celebrates food heroes who help transform our agri-food systems and try to make sure everyone, everywhere has access to enough affordable, nutritious and healthy foods,” said FAO Director-General QU Dongyu. “We are delighted to have Peter Rabbit and Sony Pictures helping us to have a conversation with children and families about why food heroes are respected, so they can learn how to do their part and be food heroes too,” he added.

Through a public service announcement and social media messaging that will be seen around the world in multiple languages, Peter and his friends tackle some of the core issues regarding sustainable agri-food systems and ask young people and others to join them in taking action.

That ties in directly to FAO’s World Food Day 2021 campaign, which is geared to encourage transformations to more efficient, inclusive, resilient, and sustainable agri-food systems that make healthy foods affordable and available to everyone, and limit adverse environmental and climate impacts. A key theme is that “our actions are our future”, meaning that everyone has a role to play.

During the COVID-19 pandemic, we all benefited from the efforts of those who produced, planted, harvested, fished or transported food, people hailed by FAO as food heroes.

“It’s an honor that our Peter is working with the United Nations for this worthy cause, which will bring awareness to some very important issues that are very dear to Peter’s heart,” said Will Gluck, writer, director and producer of PETER RABBIT 2: THE RUNAWAY. “Sustainable food is at the core of the Peter Rabbit stories, so we are really happy that the UN, FAO and the UN Foundation see Peter as a helpful voice for this important matter.”

“Peter Rabbit is a fun-loving character loved by children and fans worldwide,” said Maher Nasser, Director of Outreach in the United Nations Department of Global Communications. “Peter can help the UN reach new and important audiences. His voice is a great way to speak to children and their parents about the importance of healthy eating, buying local produce and other sustainable practices that are important to their health and the health of our planet.”

Peter Rabbit will do his part as a food hero, appear in a FAO World Food Day children’s activity book and more.  Stay tuned!

About PETER RABBITTM 2: THE RUNAWAY

In PETER RABBITTM 2: THE RUNAWAY, the lovable rogue is back. Bea, Thomas, and the rabbits have created a makeshift family, but despite his best efforts, Peter can’t seem to shake his mischievous reputation. Adventuring out of the garden, Peter finds himself in a world where his mischief is appreciated, but when his family risks everything to come looking for him, Peter must figure out what kind of bunny he wants to be.

About the UN Food and Agriculture Organization

FAO is a specialized agency of the United Nations that leads international efforts to defeat hunger, supporting governments to transform agri-food systems through Better Production, Better Nutrition, a Better Environment, and a Better Life – leaving no one behind. FAO works in over 130 countries worldwide. We believe that everyone can play a part in ending hunger.

The agri-food system covers the journey of food from farm to table – including when it is grown, fished, harvested, processed, packaged, transported, distributed, traded, bought, prepared, eaten and disposed of. It also encompasses non-food products that constitute livelihoods, and all of the people as well as the activities, investments and choices that play a part in getting us these food and agricultural products.

World Food Day is observed on 16 October each year and marks the day on which the UN Food and Agriculture Organization (FAO) was founded in 1945.  The 2021 campaign will raise awareness of the need for more efficient, inclusive, resilient and sustainable agri-food systems and call for action across sectors to contribute to the transformation that is needed to ensure these systems deliver enough affordable, nutritious and safe food for all.

#WorldFoodDay 2021 will be celebrated a second time during the COVID-19 pandemic, whose repercussions disrupted agri-food systems and triggered an unprecedented global economic recession resulting in a dramatic loss of livelihoods and incomes and increased food insecurity and inequality.

About the ActNow Campaign

ActNow is the United Nations campaign for individual action on climate change and sustainability. The campaign is a critical part of the UN’s effort to raise ambition and action on the climate crisis and accelerate implementation of the Paris Agreement.

ActNow uses a mobile app by AWorld, and a chat bot on the website, to recommend daily actions to reduce our carbon footprints – like traveling more sustainably, cutting food waste, saving energy, or reusing clothes. For more information and to download the app, go to: www.un.org/actnow.

Growing leaders to feed the future