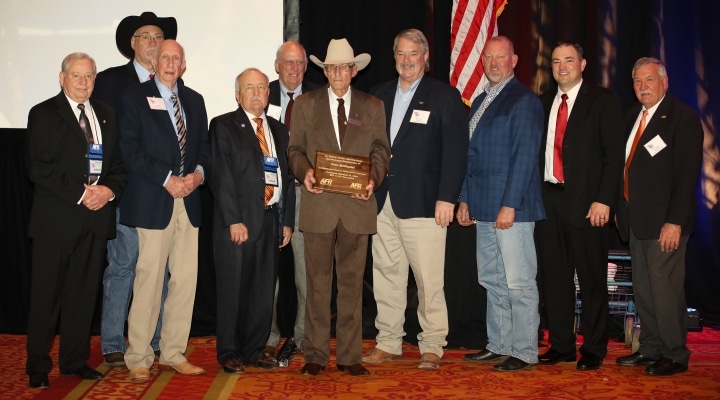 McDaniel was surprised by the award, which was held in secret until the time of announcement.

“I was at a loss for words; I was so stunned and shocked,” said McDaniel, whose extended family also surprised him at the event. McDaniel did not know they were in attendance until the award was presented.

“I’m truly grateful,” said McDaniel. “It’s been the highlight of my life. I want to thank everybody—there’s just so many and they all play a part, especially the employees.”

The Oklahoma Farmers Union Meritorious Service Award—the organization’s equivalent of its hall of fame—is rarely awarded. McDaniel is only the 13th recipient in the organization’s history. The award is only given when an individual has merited such an honor and the organization as a whole feels it is deserved.

The OFU Meritorious Service Award shines a spotlight on individuals who give selflessly to the organization, who tirelessly advocate for AFR/OFU, family farms and Oklahoma agriculture, and who set a positive example for other AFR/OFU members to follow. Award recipients must exhibit these qualities over a long history with the organization, showing commitment, loyalty and consistency.

“Pete McDaniel is what the Meritorious Service Award is all about,” said AFR/OFU Cooperative President Scott Blubaugh. “He’s a passionate advocate for agriculture and the family farm. He’s served our organization faithfully for decades. He is a selfless, honest and exceptional man and an example for us all.”

McDaniel is a long-time OFU member with family ties back to his grandparents’ OFU involvement. His parents were royalty owners in the Farmers Union Royalty Cooperative beginning in 1940. In 1999, he began his tenure with AFR/OFU as the organization’s Area 8 field representative. He continues to work as a field representative for AFR/OFU, primarily working the southwest district and large statewide events.

“I have thoroughly enjoyed meeting people from all over the state; my family has grown from just a few to thousands over the years. This organization has some of the best people in the world.”

Over the years, McDaniel has lobbied in Washington, D.C., on National Farmers Union legislative fly-ins, attended NFU Conventions as a delegate, and helped with countless state conventions. He also has been a steady presence and mentor for other AFR/OFU members—young farmers, businessmen and even legislators who may need advice or direction.

“The recipient we honor tonight has gone above and beyond the call of duty,” said Blubaugh during the award presentation. “He consistently takes on additional tasks, shows early, stays late and helps in any extra way he can. He has not only give his labor to the organization, but also his heart.

“Everywhere he goes, he’s pushing our current legislative issues, publicizing our activities, and talking about our organization with every member and non-member he meets. He is always pushing the AFR/OFU brand.”

McDaniel began his farming career in 1959. He has farmed continuously since then, including during his tenure with AFR/OFU. His 150-head cow-calf, wheat and hay operation currently consists of just under 1,000 acres of owned land, including the homesteads of his father and grandfather. He has also worked for his local farmers’ cooperative, including eight years as assistant manager and three years as manager.

“My only regret is not getting involved earlier,” said McDaniel. “I had never even attended a county meeting when I got involved. And, it’s been a joy; it’s been such a good thing for my life.

“This is the greatest organization I’ve ever known. It’s done more for agriculture in rural Oklahoma than any other organization out there. The founders saw a need, felt the necessity, and did something about it. They ended up with a great organization.”