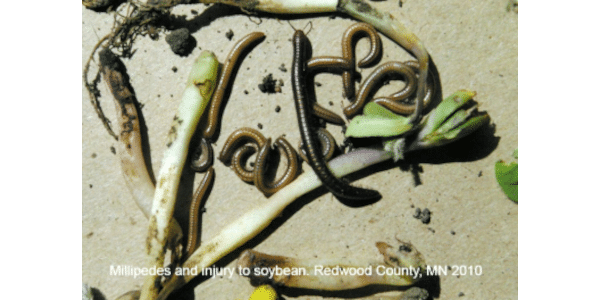 Millipedes in minimum and no-till fields may be affecting emergence and early season stands this spring. (Courtesy of University of Minnesota SW Research and Outreach Center)

LAMBERTON, Minn. — Adults are moving into alfalfa now. Populations of alfalfa weevil adults and other insect pests are currently low at the SWROC. Larvae are the damaging stage with late first and early second cutting most often affected.

Based on my windshield observations and the digital pictures that I’ve received; corn emergence is looking good for the most part. This includes April 10th (the longest day of the year) planted fields. Some early-planted soybeans are also starting to emerge. Some dramatic effects of the sheltering effect from windbreaks groves, etc. on crop emergence are visible this year.

Millipedes in minimum and no-till fields may be affecting emergence and early season stands this spring. Reid Olson sent some pics of one of the offending arthropods and some damaged soybean seedlings. Soybeans seem most vulnerable but damage to corn has been reported also.

Millipedes (thousand leg) are not insects. They are cylindrical, hard bodied and have two sets of legs on each of their many body segments; hence the name of the taxonomic class to which they belong is Diplopoda (double foot). They prefer cool, moist conditions; typically feeding on decaying organic matter.

Millipede infestations are most often found in fields with large amounts of residue. They may attack decaying seed and seedlings but can also feed on live tissue. Some points to consider in case you come across millepedes during this spring’s scouting efforts:
• Neonicotinoid insecticide seed treatments do not appear highly effective.
• Pyrethroids may provide some control, but the millipedes need to contact with the insecticide.
• From infestations that I have experienced, damage can decline with hot, dry weather and as plants become larger.