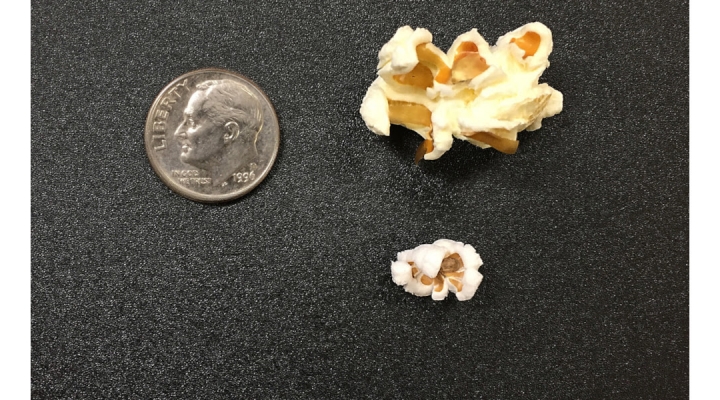 A comparison of popcorn (upper right) to popped sorghum (bottom right). The smaller size of popped sorghum could be a benefit for its use in granola bars and candy. The dime is for scale. (Credit: MA Kent)

WASHINGTON — Popcorn is one of America’s favorite snacks. But did you know that a grain called sorghum can also be popped?

Sorghum is the fifth most widely grown cereal grain in the world. It is a versatile crop grown to produce grain, forage, or syrup. Sorghum can also be used as a biofuel crop, because it’s very efficient in its photosynthesis and creates a large amount of biomass.

In the United States, sorghum is predominantly used as animal feed in the form of grain or forage. In the past five years, U.S. interest in grain sorghum as a (human) food grain has increased. Sorghum is gluten-free, is not genetically modified, and some types are excellent sources of antioxidants.

Popped sorghum is another application for the grain. Like popcorn, certain genotypes of sorghum produce a white and generally spherical piece of popped “endosperm” when subjected to high heat. Popped sorghum is not a new concept, having been used in India and Africa as both human and animal feed.

To date, there has not been a sorghum hybrid specifically developed with popping characteristics as a primary selection trait. Mitchell Kent has been part of the team at Texas A&M working to breed a better popped sorghum.

Their paper was recently published in the Journal of Plant Registrations, a publication of the Crop Science Society of America.

“Compared to popcorn, popped sorghum has a smaller popped kernel size,” says Kent. “This quality makes it ideal in products where popcorn is too large to be used, like granola bars or candies. In addition, popped sorghum doesn’t have a strong flavor, which makes it desirable for added flavoring. The popped grain of sorghum is also more tender than popcorn and doesn’t contain hulls.”

“The starch and protein in popped sorghum is more digestible than in the un-popped grain,” says Kent. “This could lead to an increase of popped sorghum flour-based products and animal feed.”

For the past few years, the team at Texas A&M has evaluated and tested sorghum pollinator lines in hybrid combination. They wanted to identify hybrids with high:

“The hybrids we released are high yielding, agronomically adapted grain sorghum that can be used in the popped grain industry,” says Kent. Their technical names are Tx3489 and Tx3490.

The team began breeding this new sorghum by focusing on its agronomic qualities. These qualities include yield, and performance in variable weather and watering conditions. Then they tested popping quality.

Future plans for additional research in pop sorghum are possible. The group at Texas A&M Sorghum Breeding Lab will continue to pop and evaluate new genotypes as candidates for popping. They are also looking at ways to screen material more effectively, since popping large numbers of genotypes is very time consuming.

Seed of these new varieties, Tx3489 and Tx3490, are kept by personnel at Texas A&M University. Other breeders can request some seeds for use in their breeding programs. In addition, more seed is stored in the USDA-ARS National Plant Germplasm System.