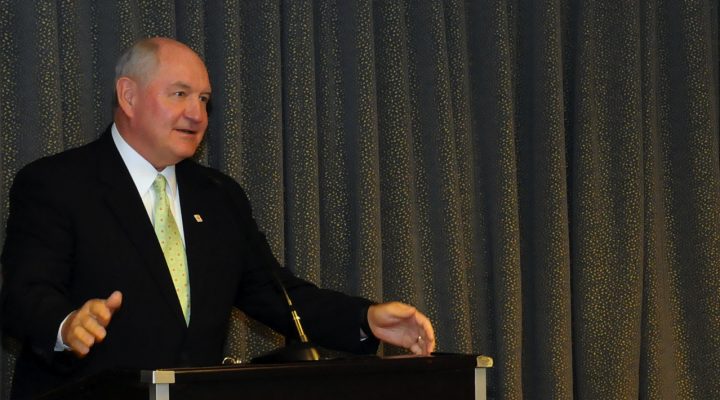 "While NAFTA has been an overall positive for American agriculture, any trade deal can always be improved," stated Secretary Perdue. (Public Domain/US Embassy Photo by Pablo Castro)

“While NAFTA has been an overall positive for American agriculture, any trade deal can always be improved. As President Trump moves forward with renegotiating with Canada and Mexico, I am confident this will result in a better deal for our farmers, ranchers, foresters, and producers.  When the rules are fair and the playing field is level, U.S. agriculture will succeed and lead the world. It’s why we recently announced the creation of an undersecretary for trade at USDA, because as world markets expand, we will be an unapologetic advocate for American agriculture. As I have often said, if our people continue to grow it, USDA will be there to sell it,” said Secretary Perdue.

Last week, Secretary Perdue announced the creation of an undersecretary for trade and foreign agricultural affairs in the USDA, a recognition of the ever-increasing importance of international trade to American agriculture. The new undersecretary will work hand in hand with Commerce and the USTR and help open up even more markets to American products.

Agricultural trade is critical for the U.S. farm sector and the American economy as a whole.  U.S. agricultural and food exports account for 20 percent of the value of production, and every dollar of these exports creates another $1.27 in business activity.  Additionally, every $1 billion in U.S. agricultural exports supports approximately 8,000 American jobs across the entire American economy.  As the global marketplace becomes even more competitive every day, the United States must position itself in the best way possible to retain its standing as a world leader.

The impact of invasive plants can linger