Home / Colorado / Peppers have it made in the shade
A new user experience is coming! We'll be asking you to login to your Morning Ag Clips account March 1st to access these new features.
We can't wait to share them with you! Read more here. 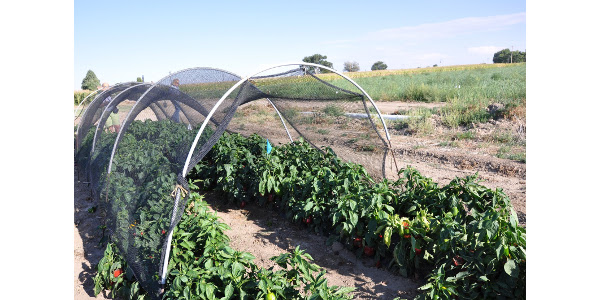 BOULDER, Colo. — If you look forward to perfect peppers but are disappointed when they get sunburn, there aren’t as many as you thought, or they aren’t as big as you’d like, chances are that you have sunlight to blame. High solar intensity and temperatures work against getting the most of our pepper crops.

Research on shading peppers is casting light on the benefits of cooling things off a bit on leaves and the root zone. Heat stress reduces plant’s ability to photosynthesize and cool itself efficiently, which in turn limits root development. Increasingly higher temperatures in summer limits root growth and damages fruit.

Colorado’s research into solving this problem is led by Dr. Mike Bartolo, Senior Research Scientist and manager of the Arkansas Valley Research Center in Rocky Ford. He’s been researching the development of chili peppers since 1992.
Bartolo’s research into preventing sunscald on the fruit of peppers led him to using 30-percent shade barrier over some plants to protect the fruit from harmful rays. But now that shade is proving effective in shielding plants from high temperatures as well – the transplants he covered with shade in early June aren’t showing the stress the exposed peppers are.

Globally, researchers concerned with the effects climate change could have on crop production are exploring ways to buffer hotter temperatures. Growing under shade cloth has garnered interest, and researchers are working to find the type of shade cloth that gives the most benefit. University of Georgia has shown that the color of the shade netting doesn’t make much difference; however, leaf surface temperature remained higher under white shade cloth.
In our gardens, peppers covered with shade cloth or floating row covers are also in much better shape. Popping a tent of 30-percent cloth over your crop might help get things growing again, Bartolo said. “As long as the stem is ok and not injured by sunscald, things should get moving again once things cool down or you shade the plant.”

A bit of shade is helpful to other plants as well, such as basil or tomatoes during fruit production. Mulching also helps keep the plant cool since it protects roots from water loss and soil cracking.
Shade cloth is available at garden centers in various lengths. It’s a durable fabric that can be used for several years. When covering your plants, remember that this is to be suspended above them, unlike floating row covers that can sit right on the plants. Create a frame for holding the shade barrier two to four feet above the plants, taking care that it’s secure for wind.

Floating row covers provide about 15 to 19-percent shade, which might not be enough at this time to break the grip of heat. Early in the season it would help for root development, so keep it handy for next year.

The Next Generation of Ag community tour