Home / Pennsylvania / Pennsylvania 4-H announces new State Project Ambassador Team
A new user experience is coming! We'll be asking you to login to your Morning Ag Clips account March 1st to access these new features.
We can't wait to share them with you! Read more here. 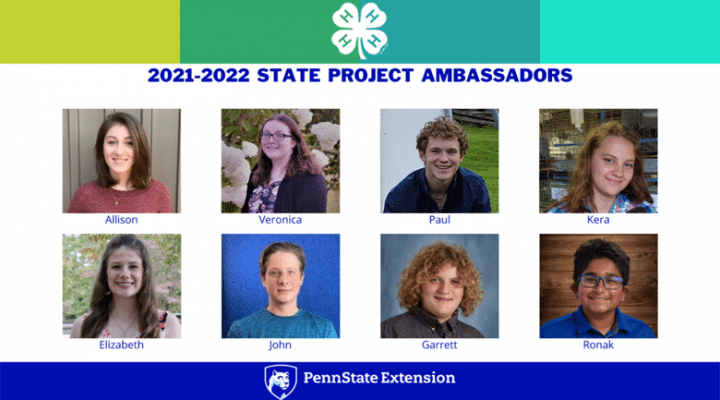 Pennsylvania 4-H now has a new leadership opportunity and a new team of young people ready to tackle the big questions, with the installation of State Project Ambassadors. Team members officially started their terms October 9th, as they were announced during the organization's Junior State Leadership Conference. (photo by Penn State Extension)

UNIVERSITY PARK, Pa. — Pennsylvania 4-H now has a new leadership opportunity and a new team of young people ready to tackle the big questions, with the installation of State Project Ambassadors. Team members officially started their terms October 9th, as they were announced during the organization’s Junior State Leadership Conference.

Jeanette Stackhouse, Pennsylvania 4-H teen program manager, explained that she saw a need for more leadership opportunities and a platform for youth input to be more prominent for events and programs.

“4-H is a youth development organization, so it makes sense that our young people should be more involved in the decisions that impact the programs in which they participate,” Stackhouse said. “Youth voice is such an important component of what we do, but we were missing a platform to do that at a statewide level.”

State Project Ambassadors, called SPAs, will be teamed up with a particular project working group, made up of 4-H staff from county and state levels. Each group focuses on a specific category of related projects. Throughout the year of their term, ambassadors on this working group will provide input from a youth perspective for the 4-H staff who are planning events, writing new curriculum, or developing any other initiatives.

According to Stackhouse, this forum of youth voice will ensure that Pennsylvania 4-H keeps its programs relevant and exciting to all youth who participate. A maximum of four ambassadors will be selected to serve per working group in this pilot year.

“Before putting together the plan for this program, I met with a group of County Council representatives [teen leaders who serve at the county level] to get a feel for what leadership experiences they wanted to gain in 4-H, as well as how they would envision their roles as part of an ambassador program,” Stackhouse said. “That focus group was eye-opening for me, and they provided many great ideas. I’m looking forward to similar conversations that will emerge from having SPAs involved in other project areas.”

Stackhouse noted that she also sees this program as a chance for 4-H members to network with others from around the state and learn more about the opportunities available within their preferred project area, including workforce opportunities.