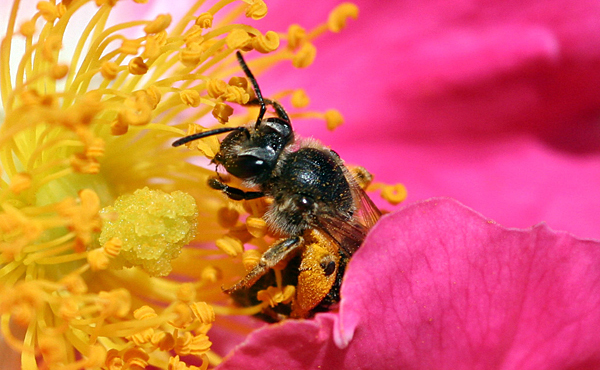 Within the past decade, beekeepers across the globe have observed massive declines in managed honey bee populations. Given their critical role in the nation’s agricultural industry, Penn State’s Christina Grozinger and the Center for Pollinator Research are implementing creative approaches to protecting bee populations in Pennsylvania and beyond. (Wikimedia Commons)

UNIVERSITY PARK, Pa. — Within the past decade, beekeepers across the globe have observed massive declines in managed honey bee populations. Similar declines have been observed in populations of wild bees and other pollinators. Understanding what is driving these declines is a vital question for researchers, beekeepers, growers, and the public. Several factors are being investigated, including habitat loss, climate change, disease and pesticide use.

In the United States, honey bees and wild bees contribute $20 billion each to agriculture and industries that depend on agriculture, meaning that fewer bees could lead to smaller harvests and increased food prices. Given their critical role in the nation’s agricultural industry, Penn State’s Christina Grozinger, distinguished professor of entomology, is leading an interdisciplinary team of faculty and students researching and creating solutions to help honey bees thrive, starting in our own backyards.

READ MORE about how Grozinger and Penn State’s Center for Pollinator Research are developing and implementing creative approaches to pollinator conservation at impact.psu.edu.

'Crazy' beekeepers determined to make it in tough times
October 19, 2020