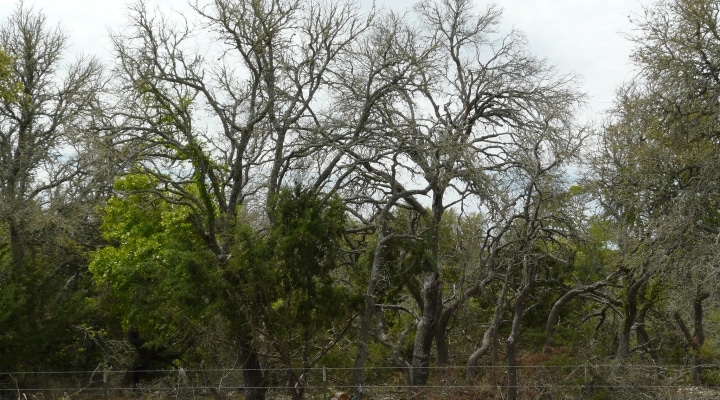 An outbreak of oak wilt has been detected at Penn State’s Stone Valley Experimental Forest in Huntingdon County, caused by the invasive fungus, Bretziella fagacearum. The disease, which can infest all species of oak, is fatal to trees and is primarily a threat to red oaks in western Pennsylvania forests and landscapes, west of the Susquehanna River. (photo by Michele, Creative Commons/flickr.com)

An outbreak of oak wilt has been detected at Penn State’s Stone Valley Experimental Forest in Huntingdon County, caused by the invasive fungus, Bretziella fagacearum. The disease, which can infest all species of oak, is fatal to trees and is primarily a threat to red oaks in western Pennsylvania forests and landscapes, west of the Susquehanna River.

Extension foresters are working with scientists in the Pennsylvania Department of Conservation and Natural Resources to test a new protocol for stopping the spread of oak wilt that was first developed in Wisconsin by the U.S. Forest Service and that state’s department of natural resources.

“While oak wilt has been found in a few urban oaks in the State College area and other urban communities, it has not been found in the surrounding forest until now,” said Calvin Norman, extension forester and wildlife educator. “If not controlled, the disease has the potential to infect and kill trees in Pennsylvania oak forests. Trees die because the fungus prevents the movement of water and sugars to the canopy. With no live leaves, the tree starves as it uses up its carbohydrate reserves.”

The origins of the Bretziella fagacearum fungus that causes oak wilt are unclear. Scientists believe it is native to Central America — it first was seen in Mexico. The disease showed up in Pennsylvania in the 1960s, according to Norman.

“We don’t know how it got here, but it is now spreading around the state,” he said. “In the Midwest, where there are sandy soils, the fungus spreads from tree to tree through root systems that are grafted together, and it can kill acres of oaks just through underground spread. In Pennsylvania, with our heavier clay, rocky soils, it may be spread more by insects.”

Tiny bark beetles — attracted by the odor of sap — inadvertently carry spores from infected trees to uninfected trees. But they can find a new tree on which to feed only when it gets injured and they can detect sap, Norman noted.

“Oaks in urban settings tend to have more problems, because those trees get damaged,” he said. “People inadvertently wound them, they’re around power lines and power companies prune them. Incidentally, a power line right-of-way is where we found an additional infestation in oak trees on the Tiadaghton State Forest.”

Also, Norman added, it is much easier to identify trees infested by oak wilt in urban settings where there are only a few trees, compared to a mountain full of trees.

The key to oak wilt management is early detection and rapid response, Norman pointed out. In Stone Valley, Penn State foresters quickly caught it and developed a response. The traditional protocol is to set up a buffer around an infected tree, break all of the roots leading from the buffer with a vibrating plow (to prevent spread by roots), and then sacrifice all oaks within the buffer.

“But this protocol is both expensive and difficult to carry out — vibrating root plows are hard to find and limited in where they can operate,” said Norman. “It was estimated that controlling the outbreak in Stone Valley would cost $30,000. That’s why Penn State, in an effort to improve oak wilt management, will be trying a protocol pioneered in Wisconsin in which infected trees are sacrificed using herbicide to stop root transmission and then are felled and removed.”

To learn whether an herbicide can be used to control oak wilt outbreaks in trees determined by the Penn State Plant Disease Clinic to be infected, Norman and other extension foresters injected infected and buffer trees with a triclopyr herbicide formulation in the summer.

Those trees will then be felled or harvested from October to March, with the following wood-disposal options being tested: sawlogs kiln dried and processed into boards; whole trees chipped; trees split into firewood, stacked and tarped; or incineration. After a year, the wood is no longer considered a reservoir for the disease and may be left to decompose on site.

For more information, see the oak wilt page on the Penn State Extension website at https://extension.psu.edu/oak-wilt.