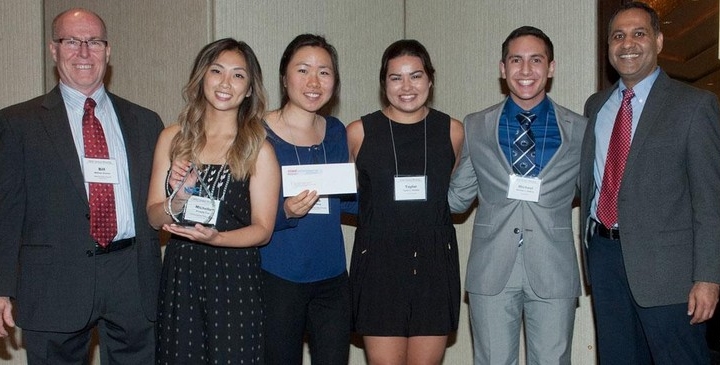 UNIVERSITY PARK, Pa. — Three teams of food science students from Penn State’s College of Agricultural Sciences came out on top in national product-development competitions and a trivia bowl in June.

At the American Dairy Science Association’s annual meeting in Pittsburgh, six student teams participated in the National Dairy Council’s New Product Competition to come up with a high-protein dairy beverage targeting consumers between the ages of 15 and 25. According to the National Dairy Council, this demographic combines young millennials with the oldest members of Generation Z and represents “ethnically diverse, socially connected young people who enjoy exploring authentic, global food experiences and new flavors.”

The Penn State team took first place and an $8,000 prize. Their product, FüZen, is a dairy-based beverage with unique dual-bottle packaging designed to support the on-the-go, healthy lifestyle of moderately active young adults. Each package of FüZen comes with 8 ounces of two flavors — chocolate-coconut and vanilla-cardamom — which can be consumed together or separately depending on consumer needs and preferences. Consumed alone, the chocolate-coconut flavor provides slightly more protein and less added sugar and fewer calories than the vanilla-cardamom flavor.

FüZen is 90 percent dairy ingredients, including 2 percent milk, whey protein isolate and micellar casein. The beverage is an excellent source of protein, calcium and vitamin D and a good source of potassium and vitamin A.

“Our department is proud of what this team was able to accomplish and we want to thank the American Dairy Science Association and National Dairy Council for providing our students with opportunities to interact with the food science and dairy industries,” said Bob Roberts, professor and head of the Department of Food Science.

At the Institute of Food Technologists 2017 annual meeting in Las Vegas, another Penn State student team competed in the Student Association’s Disney Product Development Competition, winning the grand prize and $7,500 for the innovative idea, “Snow White’s Apple Delights.” The challenge was to create a market-relevant, delicious and nutritious (meeting Disney Nutrition Guideline criteria) snack for retail sale to children ages 10 and younger. Competitors were allowed to choose one Disney franchise as the theme for their snack.

Penn State’s team, made up of Ben Chrisfield (team captain), Weslie Khoo, Kuier “Aura” Zhao, Mitchell Culler and Laurel Vernarelli, designed Snow White’s Apple Delights with the aim of creating a safe and sustainable snack for kids. The team also created a story concept to accompany its snack, positioning the product as the opposite of the original story in which Snow White’s apple is poisoned.

Snow White’s Apple Delights are gluten-free, apple-pomace wafer sandwiches with a middle layer of apple and pear fruit leather strips. The product provides excellent nutrition, with little added sugar and ample dietary fiber. It also has the added benefit of minimizing food waste by using freeze-dried apple pomace, a common but underutilized edible byproduct of apple cider and juice production. The gluten-free wafers are cut into apple shapes to appeal to young consumers.

“Our student product-development teams continue to do well in a variety of national competitions year after year,” said Dan Azzara, Alan R. Warehime Professor of Agribusiness, director of entrepreneurship and innovation, and adviser to both the National Dairy Council and Institute of Food Technologists Student Association product-development teams. “This can be attributed to their fundamental understanding of food formulation and then, how to market an idea to unique consumer segments.”

Also at the Institute of Food Technologists’ annual meeting, students from Penn State competed against eight other schools to test members’ knowledge. Since 1985, the Institute of Food Technologists Student Association College Bowl Competition, sponsored by Nestlé Purina, has tested the knowledge of student teams from across the United States in the areas of food science and technology, history of foods and food processing, food law and general food-related trivia.

The Penn State team, which previously had been named Central Atlantic Area Regional Champions, consisted of Lisa Caprera (team captain), Xiaoqing Tan, Vijay Varma Indukuri, Jaye Aster Broder and Venkata Charepalli. After competing in a double-elimination bracket in three sessions, they were awarded the title of National Champions over University of Wisconsin at Madison, in addition to a $1,000 prize. The winning question, “Which class of proteins is defined as being soluble in 70 percent ethanol?” was answered by Xiaqing Tan as “Prolamines.”

“We are proud of these students for representing the department in such an excellent manner on the biggest of stages,” said Jared Smith, lab support specialist and team coordinator. “This just goes to show how intelligent and hardworking our students are and sets the bar for future teams in these competitions.”