Home / Pennsylvania / Penn State scientists investigate horn fly resistance in organic Holstein cattle
A new user experience is coming! We'll be asking you to login to your Morning Ag Clips account March 1st to access these new features.
We can't wait to share them with you! Read more here. 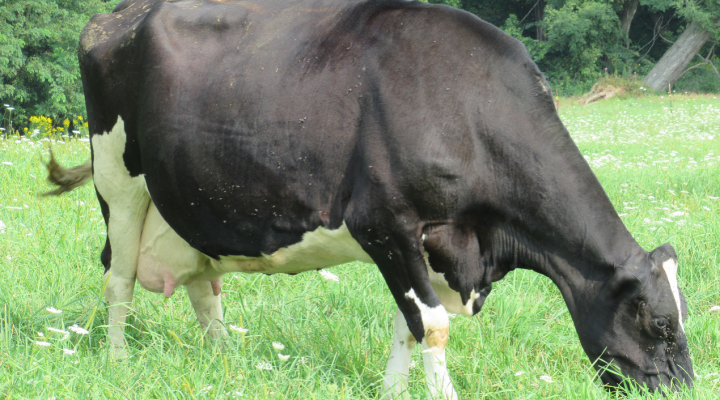 UNIVERSITY PARK, Pa. — Research conducted in Penn State’s College of Agricultural Sciences suggests that some Holstein dairy cattle, particularly those with white coat coloration, naturally fend off the horn fly, a parasitic insect known to cause stress and disease in grazing cattle.

The findings eventually could help organic producers whose livestock must be pasture-raised and must not be exposed to synthetic pesticides or given antibiotics, noted lead researcher Bailey Basiel, a graduate student in the Department of Animal Science.

“Horn fly infestation results in more than $700 million in lost profit in the United States annually, with another $60 million spent by producers on fly control,” said Basiel, who conducted the investigation under the guidance of Chad Dechow, associate professor of dairy cattle genetics.

Aside from the economic impact, the more significant concern is the horn fly’s impact on animal welfare, explained Basiel. “Horn fly bites are painful and irritating to cattle,” she said. “Severe infestations can lead to bacterial infection, stress, decreased milk production, weight loss and poor health.”

To address the problem, the researchers wanted to learn if resistance to horn flies is a heritable trait in Holstein cattle, and if so, what genes are responsible for making those cattle less attractive to the insect.

Working with 13 organic dairy producers across the country, Basiel and her team documented fly loads on more than 1,600 pastured Holstein between May and September — the height of horn fly season — from 2017 to 2019.

Trained scorers assessed fly load on a scale of zero to four, with zero indicating few to no flies and four indicating high infestation; the scoring system was validated by counting flies from digital images. They also documented cattle color composition, assigning percentage values of black and white, and considered factors such as stage of lactation, physical environment, health status and stayability, which is the likelihood of an animal staying within a herd for a set period.

The researchers also performed genetic testing on a random subset of the animals and submitted results to the Council on Dairy Cattle Breeding. This nonprofit organization maintains a database of genetic evaluations and genomic predictions in herds worldwide.

After reviewing the photos and related fly counts, the researchers found that cattle with predominately white coats had lower fly loads than those that were predominately black.

When collated with information from the genetic findings, the scientists discovered that a region on chromosome 6 was associated with the most variation in horn fly load. The gene KIT, which is involved in coat pattern and coloration, is located within that region and likely is associated with variation in fly load, Basiel explained.

Another noteworthy discovery related to horn fly loads and milk yield. “We know that horn fly infestation negatively impacts milk and milk component yield, which we also observed in our study,” she said. “Cows with higher fly scores had reduced milk production around the time of scoring.”

However, milk and component production were genetically correlated with fly load, which means that cows that were genetically predisposed to making the most milk also were more susceptible to horn fly infestation.

Basiel and Dechow said their findings are preliminary and more research is needed to understand the potential advantages — and disadvantages — of breeding for horn fly resistance. For example, cattle with predominantly white markings are more susceptible to health problems such as sunburn and eye cancers.

“Until we determine if there are other genes or traits that influence fly load in cattle, I wouldn’t recommend breeding for white cattle only,” Basiel said. “Future studies will determine if genetic selection may be another tool to help. Until then, organic producers should continue to use good manure management, fly traps and natural repellants to protect their herds.”

The study, published in the Journal of Dairy Science, is an outgrowth of a larger examination of organic dairy cattle health that Dechow is leading. He received a grant from the U.S. Department of Agriculture’s National Institute of Food and Agriculture Organic Research and Extension Initiative for the research.

“Organic products are more expensive, and it’s because they are more expensive to produce,” Dechow said. “If we can increase efficiency by even a small amount, then organic products, such as milk, can become more affordable. Making pasture-based dairy systems more economically competitive while improving animal health and welfare is a good thing for everyone.”

Farmers in 14 counties will be surveyed on their use of conservation practices
January 18, 2022