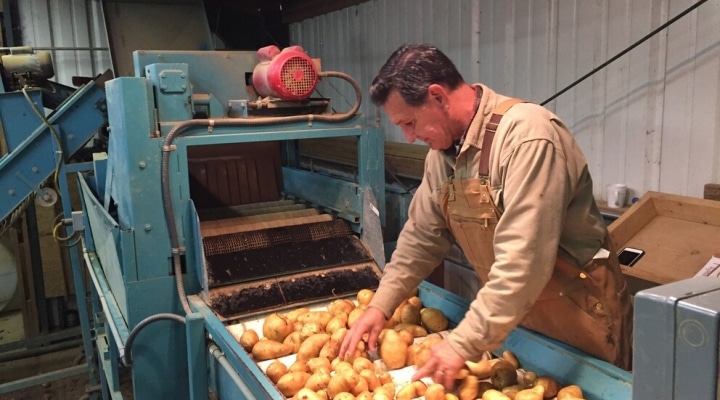 UNIVERSITY PARK, Pa. — Pennsylvania is no couch potato when it comes to producing one of America’s favorite snack foods.

The commonwealth has more potato chip manufacturers than any other state in the United States, according to Robert Leiby, agronomist for Pennsylvania Co-Operative Potato Growers. He said those manufacturers rely on the state’s potato industry, which produces about 83,000 tons of potatoes each year, primarily white potatoes used to make the popular snack.

The growers, in turn, depend on the potato research program in Penn State’s College of Agricultural Sciences to help improve the quality and quantity of their crops while staying abreast of consumer trends.

“Not only is the potato important in our diet, but it’s a valuable agricultural asset in Pennsylvania that accounts for thousands of jobs and more than $1 billion in economic impact,” said Leiby, who spent 37 years as a Penn State Extension educator in Lehigh County. “This industry is strengthened by scientists and extension educators at Penn State.”

The team works closely with potato growers to identify commercial potato production and disease problems and conducts laboratory and field experiments designed to provide critical information to solve these problems. The researchers share their findings through Penn State Extension programs and a publicly available annual report.

“The industry requires varieties with earliness, good chip quality and tolerance to biotic stresses such as diseases and abiotic stresses such as heat,” Qu said. “There are new varieties and breeding lines with yield potential and qualities for chip processing, french fry and table stock use that are being produced by breeding programs in the U.S. and Canada. The varieties are worthy of evaluation under environmental conditions and cultural practices found in Pennsylvania.”

In its early years, the program focused on potato breeding. The focus shifted to variety trials and disease management in the mid-1980s based on the recommendation of plant pathologist Barbara Christ, who inherited the program from predecessors David MacKenzie and Wilford Mills and directed it until her retirement in 2018.

Her reason for changing the program’s direction boiled down to resources. “We didn’t have the facilities for doing the kinds of cross-breeding that the industry needed,” Christ said. “I believed supporting established breeding and seed programs through variety trial investigations was a better use of our expertise.”

She was right. After forming collaborations with the U.S. Department of Agriculture in Beltsville, Maryland, the University of Maine and Cornell University, Penn State’s potato team built its client portfolio to include USDA facilities in Idaho, the University of Wisconsin, Colorado State, Michigan State and North Carolina State universities, and private companies in the U.S. and Europe.

The team evaluates about 200 potato varieties/breeding clones in variety evaluation trials and between 200 and 400 varieties and clones in disease management trials each year, according to research technologist Mike Peck, who’s been with the program for nearly 40 years.

The work takes place at the Russell E. Larson Agricultural Research Center at Rock Springs, Centre County, and at grower sites in different parts of the state. “The support we receive from growers makes our program successful,” Peck said. “They understand the importance of our evaluations in helping breeders decide which lines should be released as new varieties, which lines to focus on for potential release and which varieties are disease-resistant.”

The team has contributed to developing more than a dozen popular varieties, including the Lehigh, named for Pennsylvania’s Lehigh Valley, which served as a variety testing field site. The potato offers consistently high yields across very diverse growing regions.

The Penn State scientists collaborated with Cornell University to release two potato chip varieties, Lamoka and Waneta. “We estimate the value of potato chip production from Lamoka and Waneta for 2020 was more than $1 billion,” Qu said. “Lamoka is becoming the most widely grown recently released variety in the U.S.”

The team currently is helping to evaluate how another consumer favorite, the Russet potato, grows in Pennsylvania’s climate. Russets tend to be larger than traditional white potatoes and are a top choice for baking, mashing and french fries, Qu said.

Without Penn State, growers would be disadvantaged, Masser pointed out, especially smaller farms that do not have the resources to conduct research.

“The larger operations could conduct their own studies, but their findings would be proprietary and not shared with others,” said Masser, a Penn State alumnus who is a strong supporter of the program, the college and the University. “Penn State is a valuable and much-needed partner.”

Christ agreed, praising past and current researchers, field technicians, graduate students and growers for their dedication. “They are top-notch,” she said. “It was rewarding to work with people who put forth their best to improve the industry far and wide.”