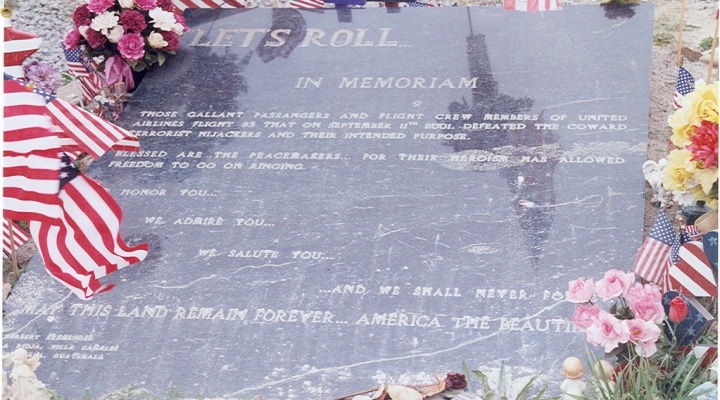 a recent appeal for assistance on a cleanup project at the Flight 93 National Memorial in Somerset County — the area in which one of the four hijacked planes crashed after the passengers and crew tried to regain control — was one assignment he couldn’t turn down. (photo by hammer, creative commons/flickr.com)

UNIVERSITY PARK, Pa. — In the aftermath of Sept. 11, 2001, Drew Leister, like almost everyone, was overcome with feelings of disbelief, nervousness and sadness.

“There were so many terrible stories about the thousands of lives lost and the difficulties faced by first responders,” said the Pittsburgh resident about the days, weeks and months following al Qaeda’s attacks against the U.S. “It created such uncertainty and anxiety that I think most people were trying their best to carry on.”

For Leister, a shaft of light in this dark time came by way of a message from Sandy Feather, Penn State Extension horticulture educator, informing him that he had been accepted into the Allegheny County Master Gardener program.

“I remember thinking this was something good to look forward to, amongst all the tragic stories,” he said. “I always had an interest in gardening as a hobby, but now I was able to learn more and educate others with information backed by Penn State research.”

In the 20 years since, he has been an active Master Gardener, informing the public on sustainable horticulture and environmental stewardship as much as his schedule allows.

However, a recent appeal for assistance on a cleanup project at the Flight 93 National Memorial in Somerset County — the area in which one of the four hijacked planes crashed after the passengers and crew tried to regain control — was one assignment he couldn’t turn down.

“It took me back 20 years, remembering where I was and what I was doing when I found out about the Sept. 11 attacks,” he said. “I felt it necessary to see the site and to help with the project. With observances planned for the 20th anniversary, volunteering was a small part that I could do.”

Leister and more than 80 other Master Gardeners from across Pennsylvania assembled Aug. 13 at the historic site and spent the day weeding, pruning and removing plant debris.

The idea for the project originated with James Savage, assistant teaching professor of horticulture in Penn State’s College of Agricultural Sciences. He and colleague Bill Elmendorf, professor and Ibberson Chair in Community and Urban Forestry, have been helping the National Park Service, which oversees the memorial, with tree management.

During a July visit, Savage noticed several parking lot islands and surrounding landscaped areas that had been overtaken by weeds, most notably Canada thistle, a fast-growing and difficult species to keep under control. There also were trees and shrubs in need of pruning.

From his past interactions with the park staff, Savage knew that, despite their best efforts, there are challenges in maintaining the 1,500-acre memorial, which features a plaza, the Tower of Voices — a 93-foot-tall musical instrument holding 40 wind chimes representing the 40 passengers and crew members — the Wall of Names, and a private area for the families.

“They don’t have an arborist or a gardener on staff,” Savage said. “I thought they could use help from people with know-how in these specialties to address the problems effectively.”

That’s when he contacted the Penn State Extension Master Gardeners. The request made its way to Area Master Gardener Coordinator Valerie Sesler, whose region includes Somerset County. Though manual work is outside of the program’s mission of education, Master Gardener leadership believed the project warranted an exception.

“The memorial is a sacred place that reflects an important time in the history and resilience of our country, especially in light of the approaching 20th anniversary of Sept. 11,” Sesler said. “However, we only had a short window to get the work done, so we weren’t sure how many of our volunteers would be able to help.”

An email blast answered that question swiftly. Within hours, more than 50 Master Gardeners confirmed their attendance for the Aug. 13 cleanup day. Another 30 or so committed shortly afterward.

With the guidance and support of Brenda Wasler, natural resource manager, National Parks of Western Pennsylvania, the Master Gardeners, park staff and members of the Penn-Del chapter of the International Society of Arboriculture helped with groundskeeping tasks.

In total, 13 large trailer loads — and several smaller ones — of tree branches and weeds were hauled away. And, in line with the Master Gardeners’ mission, an educational component was incorporated — Savage gave lessons on tree care to the Master Gardeners and visitors.

“The volunteers worked hard and had a positive attitude despite the brutal heat,” Sesler said. “We understood the importance of what we were doing to remember the victims of this tragedy and to honor their bravery. The day was very emotional, but also very rewarding.”

After the day’s tasks were done, many of the volunteers, including Leister, toured the memorial, listened to presentations and reflected. “I walked down to the Wall of Names,” Leister said. “It’s a sobering walk. Everyone had a sense of respect and reverence, reading the names and looking at the flight path.”

Wasler thanked the Master Gardeners and the others who volunteered that day. She said the memorial, which has received 3.8 million visitors since 2007, relies on volunteers to help maintain the landscape.

“I was amazed by the work that was done,” she said. “Thirty minutes into the cleanup, I could see a remarkable difference. We couldn’t have pulled together so many skilled and knowledgeable people who were so enthusiastic. We are grateful for their help in ensuring the Flight 93 National Memorial is prepared to welcome the families and visitors for the coming observance.”

Details about the “20th Observance of Sept. 11” at the Flight 93 National Memorial can be found online at https://www.nps.gov/flni/planyourvisit/sept11observance.htm. More information about the Master Gardener program is available on the Penn State Extension website at http://extension.psu.edu/programs/master-gardener.