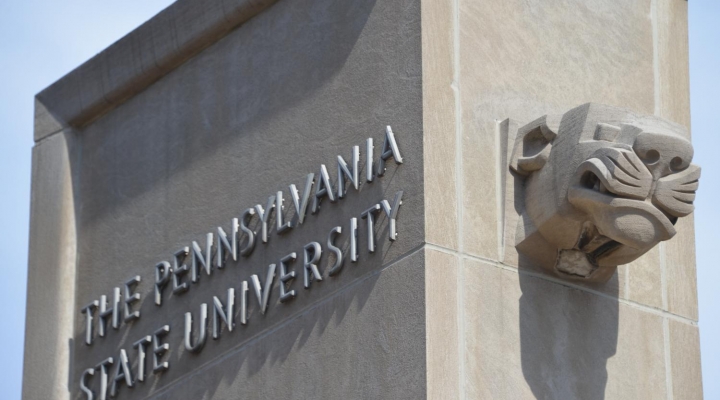 Penn State’s Office of the Vice Provost for Faculty Affairs has named Greg Ziegler, professor of food science in the College of Agricultural Sciences, as a distinguished professor. (Curtis Chan / Penn State)

UNIVERSITY PARK, Pa. — Penn State’s Office of the Vice Provost for Faculty Affairs has named Greg Ziegler, professor of food science in the College of Agricultural Sciences, as a distinguished professor.

The title of distinguished professor at Penn State recognizes the academic contributions of current, full-time faculty members who hold the rank of professor. Distinguished professors are acknowledged leaders in their fields of research or creative activity; demonstrate significant leadership in raising the university’s standards in teaching, research or creative activity, and service; and exhibit excellent teaching skills.

Ziegler is a world-renowned expert in the science and engineering of chocolate manufacturing, according to Robert Roberts, professor and head of the Department of Food Science, who nominated him for the honor.

“The major focus of Ziegler’s work has been to understand the physical and sensory properties of confectionery products, an area where he has made significant contributions,” he said. “Greg’s research to reveal the physical and structural transformations occurring in chocolate during ‘conching’ helped transform the process from an ‘art’ to a science.”

Because of Ziegler’s internationally recognized expertise in the science and engineering of chocolate manufacture, he was invited to serve as a co-author and co-editor of “Beckett’s Industrial Chocolate Manufacture and Use, Fifth Edition.” This 760-page book is the premier scientific and technical manual used in the chocolate industry.

Ziegler’s research also has contributed significantly to the understanding of biopolymer blends for creating novel structures and textures in foods. His work focused on functionalized, electrospun starch nanofibers is being developed and refined as a potential scaffolding material for “cultured meat” products.

A patent resulting from Ziegler’s research formed the basis of Persea Naturals LLC, founded in 2016 to commercialize a novel, natural food color derived from avocado seeds, a waste product in food processing. This discovery and development of the company manufacturing this color earned him a share of the 2020 College of Agricultural Sciences Research Innovator Award.

Throughout his career, Ziegler has authored or co-authored more than 140 peer-reviewed research papers and attracted more than $7.5 million in research support from a wide variety of commercial, state and federal funding agencies, including the U.S. Department of Agriculture’s National Institute of Food and Agriculture, the National Institutes of Health, and the National Endowment for the Humanities.

Roberts noted that Ziegler is a passionate teacher who has had a significant influence on hundreds of undergraduate and graduate students since joining Penn State in 1988. He said Ziegler believes that senior faculty should be in the classroom, especially teaching introductory courses. One of Ziegler’s primary teaching responsibilities is “Introductory Food Science Practicum,” a required course taught to sophomores in the food science major.

“While he has taught the course for 18 years, it is kept fresh and relevant by the introduction of at least two new labs each year,” Roberts said.

Roberts pointed out that Ziegler also has had a tremendous influence on the shape of the food science graduate program at Penn State, chairing the graduate-program committee on multiple occasions. In this role, he led a revision of the graduate program designed to quickly integrate graduate students into the scientific/academic community. As part of this curricular revision, Ziegler led the development of a four-module course covering food engineering, food microbiology, food chemistry and nutrition.

Ziegler has been the principal adviser of 34 graduate students and has made significant contributions to dozens more. He is a sought-after committee member because students and faculty advisers know he will be engaged and contribute to their success, Roberts said. Of the students he has advised, seven have obtained faculty positions and several others are high-level directors in corporations.

An active member of the Intercollege Graduate Program in Materials Science and Engineering, Ziegler currently serves as director of graduate studies for the Department of Food Science.

Serving the Faculty Senate for more than 20 years, Ziegler has received several awards over his career. For his outstanding contributions to the discipline, he was elected a Fellow of the Institute of Food Technologists in 2015, the highest honor bestowed by the professional society. In 2020, Ziegler received the Howard Palmer Faculty Mentoring Award in recognition of his efforts to develop junior faculty into productive and collegial members of the University.