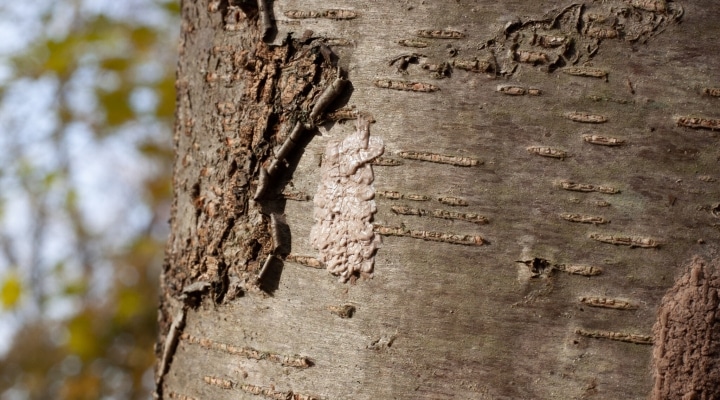 In the world of the spotted lanternfly, autumn cues egg-laying season, which leads homeowners perturbed by the pest to ponder, “What should I do about egg masses?” (photo by Luke Hearon, Creative Commons/flickr.com)

UNIVERSITY PARK, Pa. — In the world of the spotted lanternfly, autumn cues egg-laying season, which leads homeowners perturbed by the pest to ponder, “What should I do about egg masses?”

The answer, in short, is to “scrape, smash and squash.” But new research also suggests that several oil-based insecticides can be effective in destroying egg masses when applied in the weeks before egg hatch.

“The more egg masses we destroy now, the fewer we will have to deal with next season,” said Heather Leach, spotted lanternfly extension associate in Penn State’s College of Agricultural Sciences. “Citizens are critical partners in helping to slow the spread.”

She added that adult females can lay up to two egg masses, each containing 30 to 50 eggs. While the adults cannot withstand winter temperatures, their egg masses can.

“Come spring, these masses will unleash the next generation of the ravenous insect intruders,” Leach said.

Identifying egg masses can be tricky, even for citizens who are committed spotted lanternfly sleuths, because there can be a lot of variation in appearance. In general, egg masses are about 1.5 inches long and brown or grey in color. They contain rows of small eggs, roughly the size of a sharpened pencil point. Eggs within a mass are yellow or brown.

Egg mass cases that were laid up to two years ago still can be found on trees and other structures, Leach pointed out. “The easiest way to distinguish a fresh egg mass from an old one is to check for the presence of emergence holes, which are a perfect oval at the top of each egg. If these are present, the nymphs have hatched from it.”

As for where to find eggs, the answer is dismaying. “Pretty much anywhere,” said Dennis Calvin, associate dean and director of special programs in the college. “While many egg masses are found on trees, they also can be found on lawn furniture, cars, trailers, outdoor grills and on many other surfaces. That is why it is so important for citizens to scout their properties for egg masses.”

Additionally, Calvin said that most egg masses on trees will be higher than a reachable distance of 10 feet; however, he does not recommend using ladders or climbing trees to reach them.

The most effective way to destroy egg masses is to scrape them off using a plastic card or putty knife. Then, place the masses into a bag or container with rubbing alcohol or hand sanitizer, which can be disposed of in the trash. They also can be smashed or burned. A step-by-step video on removing egg masses can be found at extension.psu.edu/how-to-remove-spotted-lanternfly-eggs.

A newer method to deal with spotted lanternfly egg masses was hatched from studies done between February and April in 2018 and 2019. These findings suggest that some insecticides containing paraffinic and/or mineral oils — commonly used in fruit systems as insecticides to control soft-bodied insects — are effective in destroying eggs masses. Many of these oils are available at local garden centers.

When oils were applied at a solution of at least 3%, they were effective in killing up to 75% of treated eggs. The research also found that soybean oil had a similar effect when applied at a 50% concentration.

“Oils, when applied at the correct time and with good coverage, can offer some control of egg masses and have very little effect on nontarget species,” said Greg Krawczyk, an extension tree-fruit entomologist and research associate professor. “The use of oils provides not only a safe, environmentally friendly option but also provides control to some egg masses that are not accessible for physical removal or smashing.”

However, for masses that are within a reachable area, smashing or scraping the eggs will provide greater efficacy than the oil-based products currently available, he added. Research is continuing this winter to find other potential insecticides and optimize timing to use against egg masses.

Egg masses found in the quarantine zone do not need to be reported, apart from the newly quarantined counties of Beaver, Allegheny, Blair, Huntingdon, Mifflin, Juniata, Perry, Cumberland, York, Northumberland, Columbia and Luzerne. Egg masses found in these counties and those outside of the quarantine zone should be reported by visiting the Penn State Extension website or by calling 888-422-3359.

Citizens also should inspect their vehicles and any items they are transporting before moving them. A spotted lanternfly checklist, which can be found at https://extension.psu.edu/spotted-lanternfly, can help guide people through this inspection process.