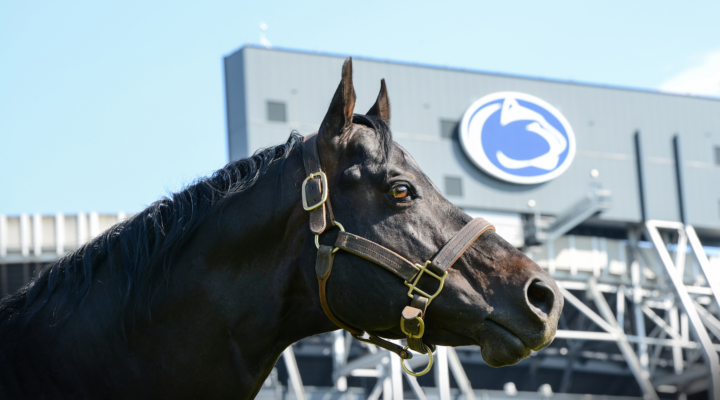 UNIVERSITY PARK, Pa. — Penn State’s Department of Animal Science’s equine program has been enhanced by the donation of an outstanding Quarter Horse stallion, One N Only (Uno), 2007 Brown AQHA Stallion, sired by Invitation Only and out of the dam Weretalkinradical. Uno was donated by Anthony and Christina Curiale, Hidden Lake Farm, Logan Township, NJ.

When the Curiales decided to downsize their breeding program in anticipation of retirement, they chose to donate Uno so they could determine the program he would be in.

Anthony and Christina said, “We selected Penn State because it is close to us and we loved how they represented the stallions they currently have. We spoke to several people who had nothing but nice things to say about Penn State’s breeding program. We are excited to watch Uno continue his breeding success with Penn State.”

Dr. Terry Etherton, Head of the Department of Animal Science, said, “We are very appreciative to the Curiale family for this generous donation. Uno will be an outstanding addition to our equine program, offering students another opportunity to work with an elite stallion, and allowing us to enhance the success of our longstanding breeding program.”

Brian Egan, Penn State Horse Farm Coordinator, said, “Uno is extremely attractive, well made and easy to handle. He is known for passing his athleticism and fantastic attitude on to his offspring. In addition, he has the genetic makeup that is desired in today’s industry. It is these attributes that should allow him to fit in nicely with the other stallions at Penn State.”

The Curiales are looking forward to visiting Uno at Penn State, and watching him contribute to the program, saying, “We are excited to see how Penn State’s broodmares cross with Uno in the coming years. We hope that the students and staff can enjoy his wonderful personality as much as we did. We think the students will be able to learn as they work with him since he is so easy to be around.”

The Curiale family purchased him as a two-year-old from Steven and Susan Thompson, Hillsboro, OH, captivated by his beautiful appearance. They said, “We hope that Uno can keep producing beautiful, great-minded foals that continue to do well at the Congress and world shows.”

The Curiales have 30 horses and two donkeys and have owned several well-known stallions: One N Only, Only in Moonlite, The Only Escape and Just Marked for Money. Their son and his wife, Anthony and Lyndsey Curiale run a training program out of Hidden Lake Farm, specializing in Hunter Under Saddle, Western Pleasure and all-around horses.