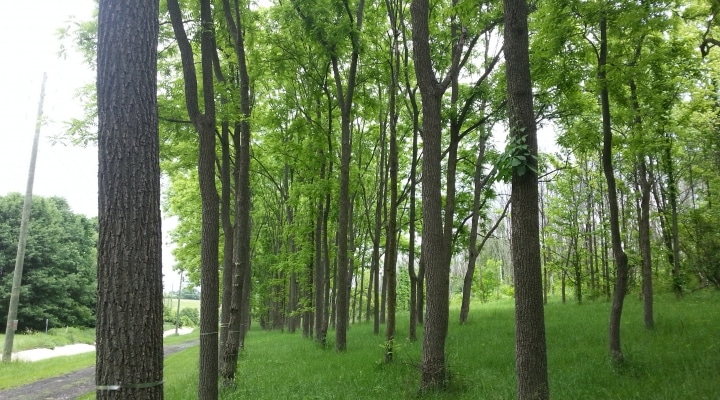 Visitors to Penn State’s University Park campus often arrive with a short list of attractions they want to see. Among the most popular are the Nittany Lion Shrine, the Berkey Creamery and The Arboretum at Penn State. Few even know about the Black Walnut Provenance Study, let alone care to visit it. (photos by Laura Leites/Penn State)

UNIVERSITY PARK, Pa. — Visitors to Penn State’s University Park campus often arrive with a short list of attractions they want to see. Among the most popular are the Nittany Lion Shrine, the Berkey Creamery and The Arboretum at Penn State. Few even know about the Black Walnut Provenance Study, let alone care to visit it.

But the little-known, two-acre grove of black walnut trees near the northeast border of campus — which turned 40 this spring — nonetheless has an interesting backstory and a role to play in ongoing and future research. Its value now is beyond what could have been imagined when it was planted in 1980. 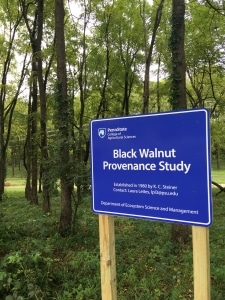 “Experimental plantations such as this have not been installed since the 1980s,” said Kim Steiner, professor of forest biology, who planted the 400 or so black walnut tree seedlings as a provenance or common garden trial. “These trials were big, expensive and required serious contributions of time and resources from collaborators — and they were slow to yield publishable results. Not surprisingly, they are out of fashion.”

But provenance trials — comprised of tree seeds imported from a wide geographical range — are designed to yield valuable information about adaptation of tree populations to their environments that cannot be discovered through modeling simulations or from DNA analyses, added Laura Leites, associate research professor of quantitative forest ecology, who is responsible for the Black Walnut Provenance Study now.

The Penn State experiment enables researchers to evaluate 36 tree populations from the entire black walnut geographic range, which covers much of North America. These populations have been subjected to a spatial change in climate so researchers can study how they respond. Each population, Leites explained, presumably is adapted to the climate of seed origin and has been subjected to a different magnitude of climate change when transferred to University Park.

The seeds that originated these trees were collected by a collaborator at the University of Vermont, and the seedlings were planted in the research plot by Steiner — who is now director of The Arboretum at Penn State — and students at Penn State in the spring of 1980. Each row of trees comes from one location, or provenance, and the differences between them are mainly genetic.

The study addresses how trees adapt to the climates they inhabit. For example, trees from colder regions are more tolerant of the cold and grow more slowly than trees from warmer regions.

The original, intended value of this research was to understand the importance of seed selection when conducting restoration and reforestation, according to Leites. Now researchers are looking to the experiment to show the impacts of climate change.

For example, a tree from Maine and one from Tennessee have very different climate-transfer distance, Leites pointed out. “We study differences in phenology — the timing of leaf emergence and leaf drop — with drones that carry cameras,” she said. “And we analyze differences in growth among the populations and as a function of climate transfer.”

Not only is this long-running trial providing critical information about adaptation to climate in forest trees, but it also provides a place for students — both undergraduate and graduate — to be involved in research, Leites noted. In the last academic year, she oversaw one graduate student and two undergraduates who conducted research at the site and presented their projects at conferences; all three won awards for their presentations.

“It also is a great place for outreach activities, and we have done teaching sessions with high school students,” she said. “In recent years, the black walnut plantation has been part of a group of studies that form the Penn State Sustainability Experience. We look forward to continuing outreach activities at the black walnut tree research plot after the COVID-19 crisis has passed.”

To learn more about the Black Walnut Provenance Study, contact Leites at lpl3@psu.edu.