Home / Pennsylvania / Penn State alumnus hits a homerun as head groundskeeper for minor league team
A new user experience is coming! We'll be asking you to login to your Morning Ag Clips account March 1st to access these new features.
We can't wait to share them with you! Read more here. 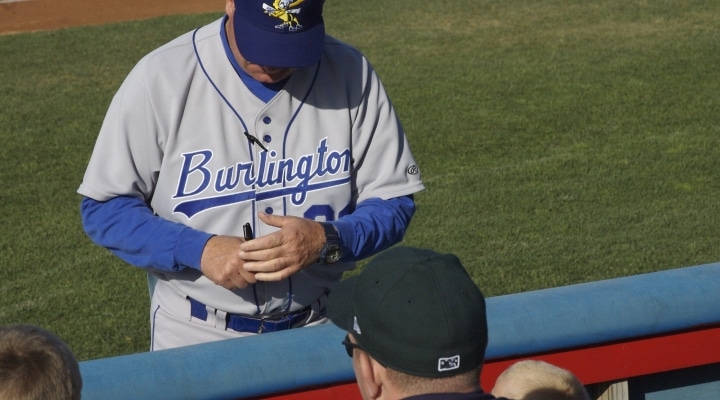 And much like the movie’s iconic line, “If you build it, he will come,” the turfgrass science graduate hopes that by restoring the Bees’ playing field, the team “will stay.”

“Through my work, I have the distinct opportunity to be part of the team working together to save affiliated baseball in Burlington,” said Barr, who graduated from the College of Agricultural Sciences in 2015. “The scenic, river-town community is most deserving of hosting a farm-system team.”

He explained that the Burlington area is the smallest market of any minor league team in America. The team plays its games at historic Community Field, a facility designed and built by the community in 1947. Since then, it has housed five minor league baseball clubs and hosted numerous home games for local high school teams.

However, the field had seen better days and was in dire need of renovations when Barr arrived in November 2019. Improving the field was a top priority for the team, especially because it is working to secure its professional affiliation — the Bees are among the 42 minor league teams whose standing is being considered by Major League Baseball, and one of the criteria is the quality of the clubs’ facilities.

Community Field recently was featured in an NBC Today show segment with Bee’s general manager, Kim Parker, who is pleased with the renovations.

“Jordan inherited a field that would be a challenge for anyone to bring back to life, but he took the challenge head-on and has made monumental strides,” she said. “His vast knowledge of agronomics, his attention to detail, his experience with field improvements and athletic field maintenance, and his critical-thinking abilities make him a great fit for our organization.”

Barr’s passion for baseball began as a youth player; he remembers building baseball fields in the sand at the beach instead of sandcastles. His enthusiasm for the sport led him from backyard baseball with his family and an Eagle Scout project that entailed making improvements to a local field, to his first position working in professional baseball as a batboy in his hometown of Lancaster, Pennsylvania, eventually joining the gameday grounds crew.

His decision to study at Penn State was based on the Turfgrass Science program’s reputation and the excitement he experienced while attending a few of the Nittany Lions’ games. “I knew the University had even greater community and learning experiences to offer,” he said.

Barr said the education he received at Penn State has made him a strong player in the turfgrass field. “The world-class, hands-on learning experiences provided by Penn State’s rigorous Turfgrass Science program was a crucial step on my career path,” he said. “The faculty experts provided me with the building blocks of success.”

One of those faculty was Peter Landschoot, professor of turfgrass science, who said his former student was dedicated, personable and curious about agronomic practices. In the course, “Case Studies in Turfgrass Management,” which Landschoot teaches, Barr took a leadership role in presenting and writing the cases assigned to his team.

“Being able to express oneself orally and in writing, in addition to working well with fellow employees in teams, is extremely important in the field of sports turf management,” Landschoot said. “I suspect Jordan’s good communication skills helped him succeed at Penn State and his career.”

The connections Barr made at the University helped him secure several internships, including with the athletic department at Texas A&M University and with an athletic field contractor in Round Rock, Texas.

He also spent three summers working with Senior Sports Turf Manager Matt Neri of the State College Spikes, an experience that had a big-league impact. “Matt’s an inspirational industry legend,” Barr said. “He has taught me everything from the tricks of the trade to professionalism.”

Andrew McNitt, program coordinator for the Turfgrass Science major, said Barr was an engaged student who excelled at networking.

“As faculty, we organize many opportunities for undergraduates to interact with alumni and other professionals in the field,” McNitt said. “Jordan excelled in his ability to engage in meaningful interaction with professionals and was able to build a rather extensive network quickly.”

Looking ahead, Barr plans to position himself as an industry and community leader. He is excited about an upcoming project that involves reconstructing a local high school’s baseball field.