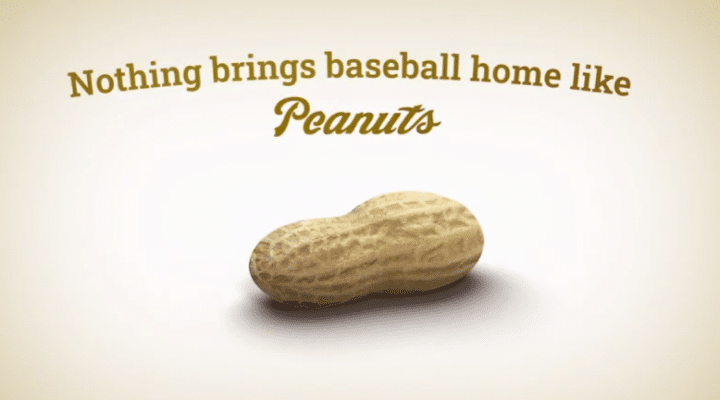 The :30 TV spot, aimed squarely at America’s baseball fans, features the familiar and inimitable cry of ballpark vendors’ (“Peanuts!”), only now heard against a variety of unfamiliar settings: a small-town Main Street, a Brownstone-lined city street, a coastal boardwalk, all the way to Grand Canyon. (National Peanut Board)

ATLANTA — The pandemic has altered the plans of an entire world, America’s favorite pastime included. And when Major League Baseball finally did return, it was without any fans in its ballparks to soak up its seminal sights, sounds or experiences, like enjoying bags of fresh roasted inshell peanuts.

After a bumper harvest of Ballpark peanuts, whose size, distinctive look and flavor have been specially cultivated to please baseball fans for over 100 years, America’s peanut farmers and industry processors had planned for and anticipated a normal 2020 season, and had already processed, sorted and bagged more than 2.3 million pounds of their beloved snack. With the decision to delay, then open the season three and a half months late to empty stadiums, those millions of pounds of peanuts were in limbo.

Enter the National Peanut Board, who represents all of America’s peanut farmers. They challenged Atlanta and Birmingham-based marketing agency LBVD with finding a way to help move these suddenly stranded peanuts.

The pandemic forced the agency to be inventive in its thinking. They believed video was the best avenue to reach baseball fans the most quickly and effectively. But video production, from casting, to location shooting, even to travel and accommodations, has been severely challenged by COVID itself. However, the team arrived at a way to produce a simple, dramatic and arresting TV spot that was conceived, produced and delivered entirely virtually.

The :30 TV spot, aimed squarely at America’s baseball fans, features the familiar and inimitable cry of ballpark vendors’ (“Peanuts!”), only now heard against a variety of unfamiliar settings: a small-town Main Street, a Brownstone-lined city street, a coastal boardwalk, all the way to Grand Canyon. This intriguing juxtaposition of sound and picture is paid off by the campaign’s tag line, delivered by a baseball-style announcer: “If you can’t get to the ballpark, we’ll bring the ballpark to you. Because no matter where you are, nothing brings baseball home like peanuts.” The spot will air on selected nationally broadcast games on FOX and broadcast and streaming games on FS1 networks through the rest of the shortened 2020 season.

According to Ryan Lepicier, chief marketing officer for the National Peanut Board, “We believe this message not only taps into the deep and longstanding connection between peanuts and baseball but does so in a surprising, simple and relevant way. It reminds us that while these are unprecedented and challenging times, we can remain resourceful and upbeat in the face of them.”

There will also be social media, as well as geo-targeted mobile messages aimed at grocery store shoppers close to the point of purchase.

As far as the 2020 baseball season is concerned, it may be later in the game than anyone had hoped, but America’s peanut farmers are hoping for a home run.