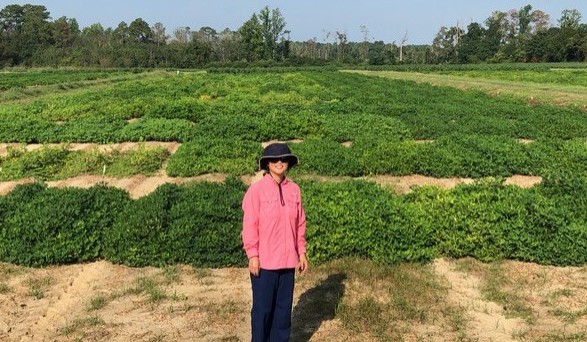 UGA horticulture scientist Ye Juliet Chu is the latest peanut researcher in the College of Agricultural and Environmental Sciences to produce three breeding lines from peanut’s wild relatives. (photos by University of Georgia)

ATHENS, Ga. — Georgia farmers produce half the peanuts grown in the U.S. each year, using proven production practices to fight disease in the field. In fact, modern peanut varieties carry little genetic defenses against some of the more devastating diseases, so peanut farmers carefully consider when to plant, whether to irrigate and when to apply fungicide and insecticide to keep those diseases from infecting the plant.

That regimen could become easier as peanut breeders work to mine peanut’s wild relatives for disease-fighting genes that would make peanut plants naturally resistant to disease, while eliminating the need for some chemicals.

The new lines Chu produced were presented in the Journal of Plant Registrations last fall.

Peanut relatives that grow wild in South America are virtually immune to some of the diseases that can devastate a peanut crop. The first challenge in tapping into these wild relatives’ genetic resources is to overcome the fact that the peanuts grown today are tetraploids — plants with four chromosomes — while the ancient relatives are diploids, containing just two chromosomes.

Over the past several years, UGA researchers, particularly in the Wild Peanut Lab in Athens and in the Ozias-Akins lab in Tifton, have been creating tetraploid hybrids from 16 wild species, using different pairings as parents and testing for disease resistance and other desirable qualities.

The second challenge to creating marketable peanut varieties with wild species’ genes is keeping the advantageous qualities of modern peanut. The lines produced by peanut’s distant cousins may be great at fighting disease, but they have low yield, produce tiny nuts that aren’t commercially marketable for products such as peanut butter, and have other physical traits that aren’t conducive to farming, such as weak pegs that would leave nuts in the soil at harvest. Peanut pegs, or roots, grow from the flower into the soil, and the pods of peanuts form in the ground from the ends of the pegs.

Once they have the synthetic tetraploid lines from the wild species, Chu and other researchers cross them with modern peanut varieties. They select offspring that show disease resistance while identifying the genetic markers for those resistance traits. That way plant breeders can more precisely select the plants that have the best genes from the wild species without holding on to any negative traits. This linkage drag — inheriting the bad traits along with the good ones — could leave the new hybrid plants with small seeds, weak pegs, trailing (low, horizontal) growth or low yield.

The three varieties registered by Chu are made from five peanut relatives and show resistance to leaf spot, the costliest disease for peanut farm management. At least six to eight fungicide sprays are needed to keep leaf spot at bay. One of the three registered varieties also is resistant to tomato spotted wilt virus, an important disease that almost wiped out peanut production in Georgia in the 1990s.

Continuing to explore the wild relatives and find resistance to diseases will allow plant breeders and farmers flexibility to respond more quickly to new challenges. A single resistance gene might be thwarted by a new disease, but harnessing multiple sources of resistance from wild species enriches the toolbox of peanut researchers to combat the ever-evolving challenges of peanut production.

2022 Clemson Extension Turf School to be held via Zoom