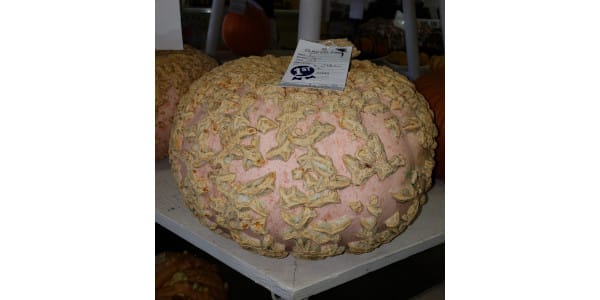 The peanut pumpkin (Cucurbita maxima 'Galeux d'Eysines') is an heirloom pumpkin variety noted for peanut-like growths on the exterior of the pink-hued rind. (Courtesy of Iowa State University Extension and Outreach)

PRIMGHAR, Iowa — While perusing the fruits and vegetables at the Clay County Fair, my eyes were drawn to several pumpkins vying for the coveted blue ribbon. What made them so distinctive was their novel appearance – pinkish color, a flat top and bottom, and beige blisters on the surface that resembled peanuts.

Upon closer inspection of the entry tags, I noted they were peanut pumpkins. The peanut pumpkin (Cucurbita maxima ‘Galeux d’Eysines’) is an heirloom pumpkin variety noted for peanut-like growths on the exterior of the pink-hued rind. The peanuts are a buildup of excess sugar in the flesh of the pumpkin. As the sugar increases, more nodes appear on the surface, and the sweeter the flesh will become.

Because the peanut pumpkin is an heirloom and not a hybrid, seeds can be saved for planting the following year. The plants are annuals and need soil temperatures of 60-70° F for germination. Plant in spacious areas with full sunlight and moisture retentive soil. Mulch to provide an area for the pumpkins to rest above moist ground and prevent rot.

As the pumpkin matures, the skin will transform from green to a salmon-peach color. When mature (95-100 days), the pumpkins will weigh approximately 15-25 pounds. Because they are not frost tolerant, be sure to harvest them prior to the first hard frost – leaving two inches of stem attached to the squash and curing for two weeks in a well-ventilated area at 80° F. Then, they may be prepared for eating or stored up to three months.

The peanut pumpkin is a 220-year-old variety that originated in France and was virtually unknown in the U.S. until it was discovered at the 1996 Pumpkin Fair in Tranzault, France. In France, the bright orange flesh is used for soups and sauces but may also be fried in butter. In the U.S., the peanut pumpkin is usually roasted, grilled, baked or sautéed; but, avoid boiling in water or steaming as the flesh becomes wet.

When cooked, the peanut pumpkin has a smooth, velvety-like texture and a sweet flavor that resembles sweet potato and apple. The pumpkin’s extremely sweet flesh makes it suitable for desserts such as pies, breads, and cheesecakes. And if cooking is not your thing, try using a peanut pumpkin for a unique Thanksgiving decoration!