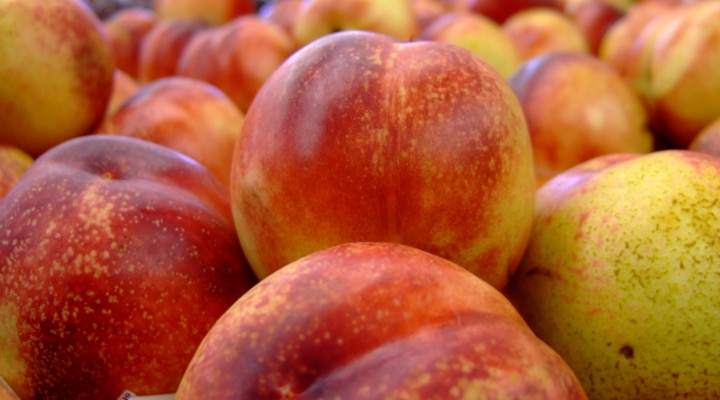 Peaches are at their sweetest in midsummer, and Virginia-grown varieties are available now at local farm stands, farmers markets and orchards. (photo by Roger Jones, creative commons/flickr.com)

WINCHESTER, Va. — Peaches are at their sweetest in midsummer, and Virginia-grown varieties are available now at local farm stands, farmers markets and orchards.

He said the orchard began harvesting peaches in mid-July, and freestone peaches are at their peak in August. Freestone varieties are noted for their ease in removing the pit.

“The peaches are sweet, juicy and tasting really good right now, but we could use some rain to help with the size,” Marker commented. “We’re not quite in as dire straits as some of our neighbors to the south, but we’d appreciate some showers to help finish out the crop.”

With adequate rain, Marker said, he expects to have peaches available at the Marker-Miller Orchard Farm Market and its U-pick operation through the end of August. The orchard’s peach festival will be held Aug. 14.

At Cullipher Farm in Virginia Beach, Mike Cullipher said his peaches “turned out to be a really nice crop” after enduring frosts in April and May.

“We thought we lost a lot to those frosts, but as it turned out, we didn’t,” said Cullipher, who also serves on the VFBF Specialty Crops Advisory Committee. “The peaches are doing well—a lot better than we expected.”

Cullipher said he began harvesting July 1 and expects to have peaches available through the third week of August. The farm sells white and yellow freestone varieties at its on-site market and through U-pick, and Cullipher said customers have been enthusiastic about the peaches’ flavor this year.

In total, the three orchards grow between 25 and 30 varieties, and Chiles said each has done “really well” in dry conditions throughout the growing season. She noted the orchards’ harvests will continue through Labor Day, and that the peaches could use intermittent rain and slightly cooler temperatures over the next few weeks.

“The peaches probably are on the smaller side due to the lack of rain, but peaches do like hot and dry weather,” Chiles said. “For consumers, they’re not going to notice that much of a difference.”

Maximize your fun at the State Fair by planning ahead
September 13, 2021