Home / Pennsylvania / PDA to spray for spotted lanternfly along transportation rights of way
A new user experience is coming! We'll be asking you to login to your Morning Ag Clips account March 1st to access these new features.
We can't wait to share them with you! Read more here. 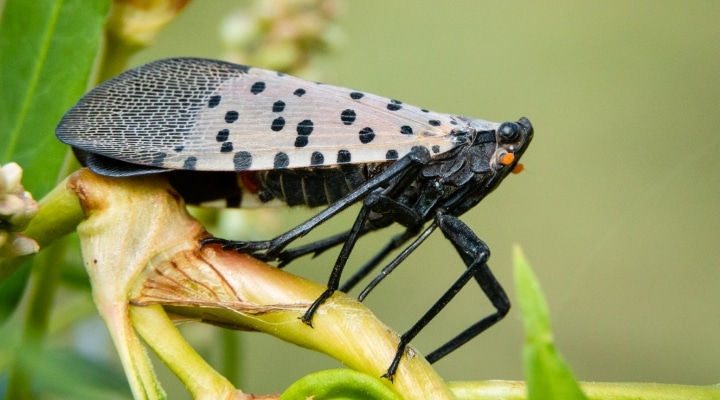 As Spotted Lanternflies hatch across much of the state, PA Department of Agriculture crews have begun to spray an insecticide that kills the insects on contact along railways, interstates and other transportation rights-of-way. (photo by Chesapeake Bay Program, creative commons/flickr.com)

HARRISBURG, Pa. — As Spotted Lanternflies hatch across much of the state, PA Department of Agriculture crews have begun to spray an insecticide that kills the insects on contact along railways, interstates and other transportation rights-of-way. Contact spraying is a new element of strategic efforts to slow the spread of the invasive pest, which moves primarily by hitching a ride on vehicles traveling out of infested areas.

The insecticide has been thoroughly researched and found to be safe for use in the areas being treated. However, Pennsylvanians on the hyper-sensitivity registry will be notified prior to spraying in their areas.

“Spotted Lanternflies threaten our quality of life outdoors and destroy valuable products that feed our economy,” Agriculture Secretary Russell Redding said. “We are working diligently and strategically to control this pest in ways that are safe for the people, pollinators, plants and animals that share the environment it threatens.”

Spraying reaches peak effectiveness when between 75 and 100% of insects are hatched. Spraying has begun in southeast and southcentral PA, where the insect’s hatch is farther along and will be scheduled elsewhere as hatching progresses in areas of the state with known insect populations. The invasive pest will be active and will reproduce and spread until fall frosts.

Product use will be limited by several factors, including weather, location and the safety of surrounding natural ecosystems. Bifenthrin is known to be toxic to fish, so no spray will be applied near water. Applicators will also avoid spraying flowering plants to protect pollinators.

Research teams and applicator crews are conducting regular environmental sampling throughout the treatment process to monitor impacts on water, soil and sensitive populations to limit any unintended consequences.

Pesticides containing bifenthrin are also available in several brand-name products for purchase by homeowners.  Learn more about controlling Spotted Lanternfly on your property on the Penn State Extension website.

There are 34 Pennsylvania counties quarantined to control the spread of the invasive insect. Recently quarantined counties have isolated insect populations, rather than widespread infestations.

Quick, aggressive treatment of newly identified lanternfly populations has been funded through the Rapid Response Disaster Readiness line of Governor Wolf’s Pennsylvania Farm Bill for the past two years. The 2021-22 PA Farm Bill proposes another $3 million to combat Spotted Lanternfly and other invasive species.

With half of Pa. dogs unlicensed, legislation to increase licensure rates