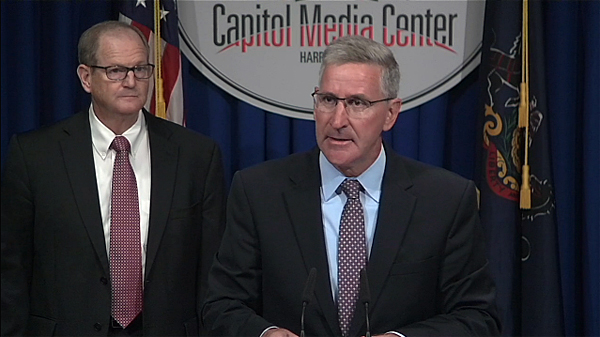 HARRISBURG, Pa. — The Pennsylvania Department of Agriculture, the United Stated Department of Agriculture and Penn State University provided an update on their work to control the spread of the spotted lanternfly – an invasive insect that has the potential to seriously impact the tree-fruit, grape and timber industries, which are collectively worth nearly $18 billion to the state’s economy.

“Through this partnership, we have been able to successfully raise awareness about this pest: what it looks like, where it’s found and the damage it could do,” said Agriculture Secretary Russell Redding. “This coalition has been the boots on the ground working to control the spotted lanternfly’s spread — and we’ve made significant strides — but we know there’s still much work left to do.”

Gov. Tom Wolf and the General Assembly approved $3 million in dedicated state funding to combat the spotted lanternfly as part of the fiscal year 2018-19 budget. This funding supplements $17.5 million in federal funding from USDA, received earlier this year. Redding noted that this funding has helped the coalition, which also includes numerous local partners, invest in a statewide survey, control and treatment services, grants and research.

This year, the partners are engaged in a multi-pronged approach to control the invasive pest. PDA has taken responsibility for suppressing spotted lanternfly populations in the core infestation area, while USDA has established a perimeter extending 18 miles out from the core area, where they are working to eliminate any infestation. Between the two agencies, the entire spotted lanternfly quarantine area — 13 counties in southeastern Pennsylvania — are being covered. Penn State’s College of Agricultural Sciences has taken the lead on public outreach through its Cooperative Extension service.

“Our main operational goal this season is to treat all the known positives from last year and treat any new properties this year into mid-September,” said Timothy Newcamp, USDA APHIS State Plant Health Director in Pennsylvania. “Our scientists are studying the effectiveness of different pesticides, working on trap and lure development, exploring biological control options and studying alternative host suitability. This research, along with that of our partners, will not only help in the battle against this invasive pest, but it will also help shape the direction of the Spotted Lanternfly Program.”

“Penn State Extension and Research within the College of Agriculture Sciences is focused on increasing the public and industries awareness of the SLF and studying the pest to learn more about its biology, damage potential and how to more effectively manage its populations,” said Dr. Dennis Calvin, Associate Dean and Director of Special Programs at Penn State Extension.

Redding said that public outreach and education is critical to controlling the spotted lanternfly’s spread.

“We want the public to not only understand the urgency of this problem, but also be able to help us in trying to eliminate it,” said Redding. “If people are aware of the pest and know what it looks like, they can report sightings to us so that we can respond more quickly. If the insect is found someplace outside of the quarantine zone, the sooner we know about it, the sooner we can react and prevent it from spreading.”

Pennsylvanians are encouraged to report sightings of the pest through an online reporting tool found at extension.psu.edu/spotted-lanternfly or by calling the new hotline, 1-888-4BADFLY. The hotline will connect callers to Penn State Extension staff who will provide guidance and next steps.

The commonwealth is also engaging with the business community, stressing the risk that interstate and international commerce may be impeded. Businesses operating within the quarantine must obtain an operating permit, which requires training and passing a test to demonstrate a working knowledge and understanding of the pest and quarantine requirements. Permits demonstrate that individuals can identify the pest and ensure that it is not present on transported items. New York, for example, has begun inspecting shipments moving from the quarantined areas of Pennsylvania into their state to ensure trucks are permitted. New Jersey also recently instituted a quarantine in three counties that may affect the interstate movement of goods from Pennsylvania.

Redding added that the Wolf administration has been training employees and issuing permits to those state workers who have taken the test. The commonwealth also plans to permit state vehicles that travel through the quarantine zone.

“The commonwealth is leading by example, and has taken the important step of permitting its state vehicles. Thus far, state employees in a number of agencies have taken the permitting test online and are training their teams to know what to do when they’re traveling in a state vehicle,” Redding said.