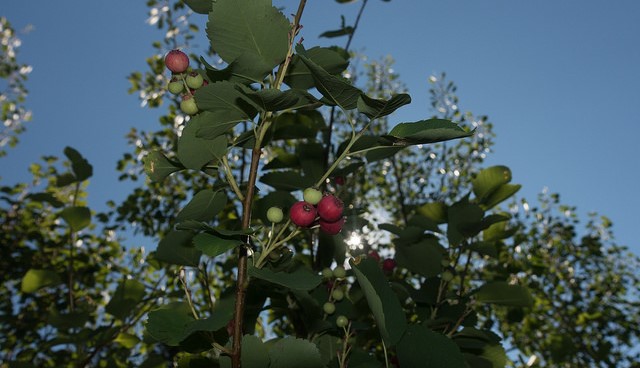 The Juneberry research nursery at Willsboro represents one of the largest living collections of Amelanchier varieties in the U.S. (GlacierNPS, Flickr/Creative Commons)

Amelanchier is the scientific name for Juneberry, considered a “super fruit” for its antioxidant value. The Juneberry research nursery at Willsboro represents one of the largest living collections of Amelanchier varieties in the U.S.

A grant from the farmer-driven Northern New York Agricultural Development Program (NNYADP) providing research and technical assistance to farms in the six northernmost counties of New York State established the Juneberry nursery at the Willsboro Research Farm. The farm is a Cornell University Agricultural Experiment Station.

Mountain Lake PBS Senior Producer Thom Hallock says, “We wanted to feature this research and the Willsboro Farm Juneberry nursery to give our viewers a look into the fascinating work that is going on to develop several varieties of Juneberries for commercial scale production that may, in the not-too-distant future, be available at farmers markets across New York State.”

To start the project, Burgess and Davis collected cultivars of wild Juneberry growing in multiple states in 2013 and 2014. Burgess grew the cuttings out in the greenhouse laboratory at SUNY Plattsburgh for transplant to the new nursery site at Willsboro. The nursery also includes commercially-available varieties of Juneberry.

The Associated Press and such publications as Fruit Growers News, Nursery Management, Producer Grower, and the international Horti-Daily have also reported on the progress of the Northern New York-based Juneberry research.

Mountain Lake PBS has been the public media station for the Adirondacks and Champlain Valley regions for more than 40 years. Its reach includes audiences in New York and Vermont, and Quebec and Ontario, Canada. Mountain Lake Journal airs on Friday at 8 p.m., Saturday at 7 p.m., Sunday at 10 a.m., and on all the Mountain Lake PBS social media platforms. Learn more at www.mountainlake.org.

It is not too late to register ...