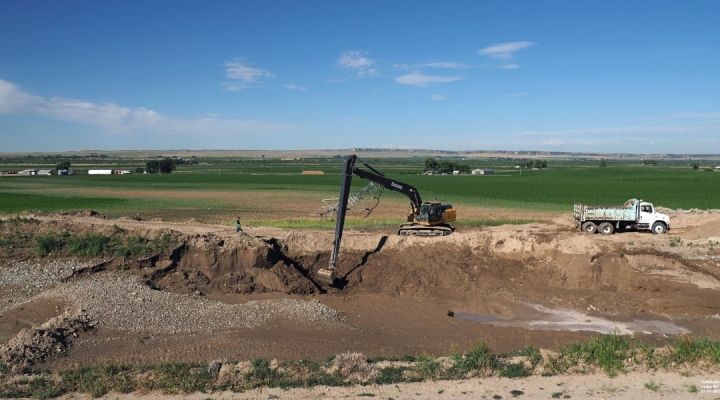 On July 1, 2022, the Pathfinder (Interstate) canal broke, flooding areas in Nebraska and Wyoming. In this picture, PID workers are removing the temporary dirt fill so that permanent repairs can be made. The light area in the field with the pivot is where the water flowed. (Photo: Gary Stone, University of Nebraska-Lincoln)

LINCOLN, Neb. — Early Friday morning, July 1, 2022, the Pathfinder (Interstate) canal breached and broke out approximately 1.75 miles northwest of Lingle, Wyo (latitude 42.159367 longitude -104.364377). The break was first noticed by a local grower who contacted the Pathfinder Irrigation District (PID) who manages the canal. PID sources believe the break occurred between 4:30 and 5:00 am. PID shut off the water diverted into the canal at Whalen Diversion Dam shortly after 5:30 am. At the time there was 2,333 cubic feet per second (cfs) or 1,047,123 gallons per minute water diverted into the canal over sixteen miles away. The break washed away 50-60 feet of the canal bank. PID began filling in the washed-out area of the canal as soon as it was practicable for them to do so to help curtail flow and was completed about 4:00 pm that day.

The water from the canal break flowed across growers’ fields going south about one mile towards US Highway 26 and the Burlington Northern Railroad. The water also flowed along County Road 69 which parallels the canal. Sections of this road were washed out. When the water reached US Highway 26 and the railroad, it flowed southeast towards the town of Lingle. Along the way, two homes and a small feedlot were flooded. The livestock in the feedlot were safely evacuated. The water covered US Highway 26 making it impassable and as a result was closed to traffic. Corn and dry bean fields were also covered with water. Fortunately, there was minimal crop loss with no serious washouts occurring. However, the affected growers need to consider potential nutrient loss, particularly nitrogen, which may have leached or washed away.  Also, any soil movement that may contain pesticides could affect the crops should be considered.

Since there are few, if any drainage culverts under US Highway 26 and the railroad along this stretch of area, the water had to follow the course which led to the town of Lingle. Goshen County Emergency Management, Pathfinder Irrigation District, Wyoming Emergency Management Agency, Wyoming National Guard and other individuals and agencies coordinated efforts to manage the flood water approaching Lingle. It was determined that the best course of action would be to use sandbags and soil to create a channel to divert the flood water through Lingle along the southern most streets in the town. Unfortunately, one business and several houses were flooded on the west side of Lingle. As it was, little of the flood water reached Lingle and the diversion channel was not needed. The flood water eventually drained away into the soil.

PID had been using the canal earlier in the season for a short “hay run” for growers to irrigate alfalfa and then the water diverted was used to fill the inland lakes north of Scottsbluff. So, there was water in the canal for a period and on Monday, June 27, growers were able to start taking water to irrigate other crops. Since the break occurred early in the growing season, there will be limited impact on crops. PID hopes to have the break repaired in seven to ten days. First PID must remove the temporary fill dirt and then dig down another 2-3 feet. The permanent fill must be compacted every foot in height, brought up to grade and approved by the Wyoming state engineer’s office.

In Wyoming and Nebraska, approximately 102,000 acres of cropland are affected by the break. It has not been determined what caused the break. The National Weather Service, Cheyenne, WY indicated there were no heavy precipitation events in the hills above the canal. Pathfinder Irrigation District manages the largest canal system in the North Platte Valley of the Nebraska Panhandle and eastern Wyoming. The canal is located on the north side of the North Platte River and diverts water for this irrigation system at Whalen Dam, approximately eight miles east of Guernsey, Wyo.

Growers and individuals who may have insurable claims need to keep records of their crop management prior to and during the water disruption. Growers must manage their crops as if the water will return. For more detailed information regarding crop insurance, please consult your crop insurance agent.

This is a stressful event for growers and communities affected by impacts of the PID canal breach. For additional resources on coping with stress, visit https://ruralwellness.unl.edu and https://disaster.unl.edu.