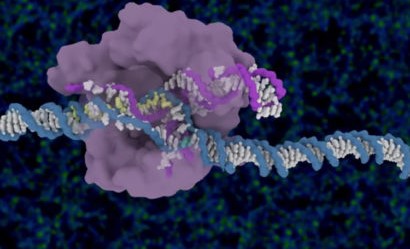 The Cas9 protein/RNA complex (purple) homes in on DNA complementary to the RNA guide and cuts the DNA, like a precision-targeted DNA scissors. (Courtesy Photo)

BERKELEY, Calif. — The University of California announced today that the U.S. Patent and Trademark Office has granted U.S. Patent Number 10,113,167, covering unique RNA guides that, when combined with the Cas9 protein, are effective at homing in on and editing genes. These RNA/protein combinations act like precision-targeted gene-editing scissors.

This CRISPR-Cas9 DNA-targeting complex, discovered by Jennifer Doudna, Emmanuelle Charpentier and their teams at UC Berkeley and the University of Vienna, is one of the fundamental molecular technologies behind the revolutionary CRISPR-Cas9 gene-editing tool.

Together, this patent and prior U.S. Patent Number 10,000,772 cover CRISPR-Cas9 compositions useful as gene-editing scissors in any setting, including animal and human cells. Additionally, the claimed CRISPR-Cas9 guides work both as two distinct pieces of RNA or as a simpler system involving a single piece of RNA.

“These gene-editing scissors have already sparked countless research projects across the globe to improve health and the food supply,” said Edward Penhoet, adviser to the UC Berkeley chancellor and assistant to the UC president. “These patents are the first of many that we expect to be awarded for the Doudna-Charpentier teams’ groundbreaking invention.”

The newly issued patent also encompasses protein/RNA compositions that can deliver CRISPR-Cas9 into cells in two different ways: as a fully functional ribonucleoprotein (i.e., Cas9 protein complexed with RNA), and with the components encoded by DNA that is subsequently expressed and assembled inside the cell to form a functional CRISPR-Cas9 complex.

The international scientific community has widely acknowledged the pioneering nature of the Doudna-Charpentier invention through numerous awards, including the Breakthrough Prize in Life Science, Japan Prize, Gruber Prize in Genetics, BBVA Frontiers of Knowledge Award and Kavli Prize in Nanoscience.

Patents for the use of CRISPR-Cas9 for gene editing in all types of cells have already been issued to the Doudna-Charpentier team by the European Patent Office (representing more than 30 countries), the United Kingdom, China, Japan, Australia, New Zealand, Mexico and other countries.

UC has a long-standing commitment to develop and apply its patented technologies, including CRISPR-Cas9, for the betterment of humankind. Consistent with its open-licensing policies, UC allows nonprofit institutions, including academic institutions, to use the technology for educational and research purposes.

The U.S. patent granted today (10,113,167) is not involved in any interference proceeding before the Patent Trial and Appeal Board of the U.S. Patent and Trademark Office or appeal before the U.S. Court of Appeals for the Federal Circuit.