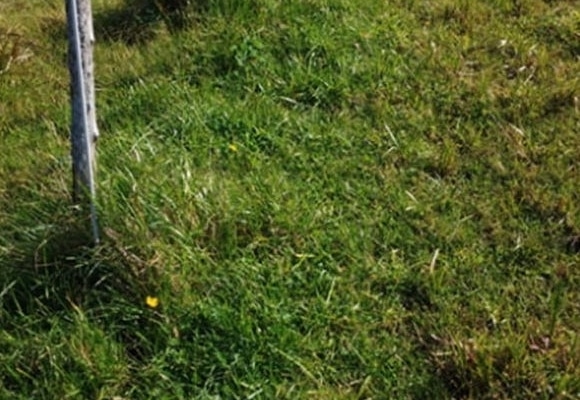 To observe the health of any soil, including pasture soil, is an evolving field of knowledge. Graziers can add to this knowledge by observing and bringing their observations to extension and research personnel. After all, as Paul Harvey said, “Despite all our accomplishments, we owe our existence to a six-inch layer of topsoil and the fact it rains.” (photo provided)

ITHACA, N.Y. — I had a pasture soil compaction epiphany while working in a St. Lawrence County pasture on a NE SARE-supported project. The project was to plant radishes and other brassicas into established pasture swards. The goal was to try methods of establishment of late-season forages which would increase the palatability and nutrient density of fall pastures. The project had only minimal success because even though I burned back the pasture sward with acetic acid, it eventually grew back and smothered the young brassicas. While standing in the pasture, I looked under the fence line (see photo 1) and could see the soil under the fence was a good six inches higher than the pasture soil. Under closer inspection, the plants under the fence were a healthier mix of cool-season grasses, while out in the pasture there were clumps of sedge grasses, which is an indication of low oxygen in the soil due to compaction. The other interesting piece of information was that I was in the pasture with the farmer who had managed it for the past 15 years and he had not noticed the difference in soil heights. I believe that this was because compaction happens very slowly over the years and goes unnoticed. Once I became aware of this phenomenon, I began to see it in more and more pastures that I visited. But how big of a problem was it?

It made sense to me that pastures would have some compaction, after all, animals that graze these pastures are out every day in the grazing season, even in times of heavy rainfall which is when soil is most prone to hoof compaction. When putting together a proposal to NE SARE to investigate pasture compaction, I found studies that showed a medium-sized cow could have more compaction per square inch than a medium-sized tractor.  To get an idea of what happens to soil when compacted, see diagram 1 showing the pie charts comparing compacted soil vs uncompacted soil. In the uncompacted soil, the area in a defined volume of soil is evenly divided between pore space and the minerals that make up the soil. In compacted soil, the pore space is reduced by about half so that there is a higher percentage of minerals in the same space. This loss of pore space has far-reaching effects on the soil to be productive.

Air space is the most affected by compaction. Its loss affects three components of productivity:

The reduction of pore space for water in the soil also has negative impacts on productivity:

Other outcomes of the NE SARE study of pasture soil compaction

A fact sheet prepared by myself,  Nancy Glazier, and Abbie Teeter was accepted by NE SARE to help farmers, not only identify, but remediate pasture soil compaction. It can be found at: https://cdn.sare.org/wp-content/uploads/20210126132426/Compaction-Fact-Sheet-Final-1.pdf

In our work, we are researching a method for comparing penetrometer readings from one year to the next. This would allow a farmer or researcher to measure any changes in pasture soil compaction due to changes in management from one year to the next. A single reading of soil resistance with a penetrometer will vary from one day to the next due to soil moisture changes. Our hypothesis is that by taking two readings in the pasture, one from the optimum compaction area under the fence line and one from an impacted area in the pasture, the ratio of the two will remain constant since whatever variable impacts one area will have the same impact on the other area. We are calling the comparison of these two sites the Pasture Compaction Ratio (PCR). The ratio of the two areas will hopefully capture any changes in the pasture compaction since the fence line reading will always be optimum the only changes will be due to changes in the pasture soil resistance. More information about the PCR can be found here: https://projects.sare.org/sare_project/lne19-372/. Our work will continue into 2021, when we will have three years of data collected on the PCR.

Compaction in pastures is difficult to avoid because of the need to have animals on them in all types of weather. Basic management tools to reduce and prevent compaction are:

Watching the health of animals on pasture is enjoyable and easy to do, observing the health of pasture plants or the sward of a pasture requires a closer look and some specific knowledge about plant identification. To observe the health of any soil, including pasture soil, is an evolving field of knowledge. Graziers can add to this knowledge by observing and bringing their observations to extension and research personnel. After all, as Paul Harvey said, “Despite all our accomplishments, we owe our existence to a six-inch layer of topsoil and the fact it rains.”