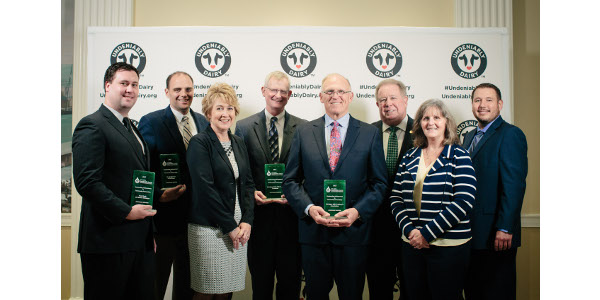 ROSEMONT, Ill. — The Michigan Milk Producers Association (MMPA), Food Bank of Eastern Michigan, The Kroger Co. of Michigan and Michigan State University (MSU) Extension were together honored by the Innovation Center for U.S. Dairy for their efforts supporting food insecure families with milk donations in the wake of the Flint Water Crisis in 2016.

For coming together to bring over 36,000 gallons of milk to a community in crisis, the organizations received an honorable mention for Outstanding Achievement in Community Partnerships by the Innovation Center during its sixth annual U.S. Dairy Sustainability Awards in a June 28 Chicago ceremony.

The community partners, armed with information on milk’s nutrient-dense profile, are helping aide residents of Flint, Michigan during an ongoing crisis in which they are susceptible to lead poisoning from contaminated water. A healthy diet that includes nutrient-rich foods can help protect children and families from the harmful effects of lead poisoning and have a positive effect on overall health.

“Milk has always been high on the list of requested items to support food insecure families, but often is in short supply,” said William Kerr, President of the Food Bank of Eastern Michigan. “The nutrient rich milk donated by the Michigan Milk Producers Association provided immediate health benefits to the residents of Flint during a time of crisis.”

“This year’s winners demonstrated impressive leadership and creativity in the application of technology and other practices that protect our land, air and water. And they’re proactive about building strong relationships with their communities and employees,” said Barbara O’Brien, president of the Innovation Center for U.S. Dairy. “Based on this year’s nominations, it’s clear that all sizes of dairy farms and companies use sustainable practices because it’s good for the environment, good for their community and good for business.”

Judges evaluated nominations based on their economic, environmental and community impact. The independent judging panel — including experts working with and throughout the dairy community — also considered learning, innovation, scalability and replicability.

“These award-winning practices can serve as models for other farmers, too,” said Jason Bateman, dairy farmer, 2016 award winner and one of this year’s judges. “Winners made breakthroughs, and they improved everyday practices. It’s inspiring to see people collaborate with partners outside of dairy and build on ideas from other industries.”

From farm to table, transparency and ingenuity drive dairy forward, as demonstrated in the newly released 2016 Sustainability Report, which describes the Innovation Center’s strategic plan focused on social responsibility. The plan was developed by dairy community leaders in recognition of the changing consumer and customer marketplace where health, environmental and ethical practices are of increasing interest.