Home / Iowa / Parsons named chair of International Assoc. of Fairs
A new user experience is coming! We'll be asking you to login to your Morning Ag Clips account March 1st to access these new features.
We can't wait to share them with you! Read more here. 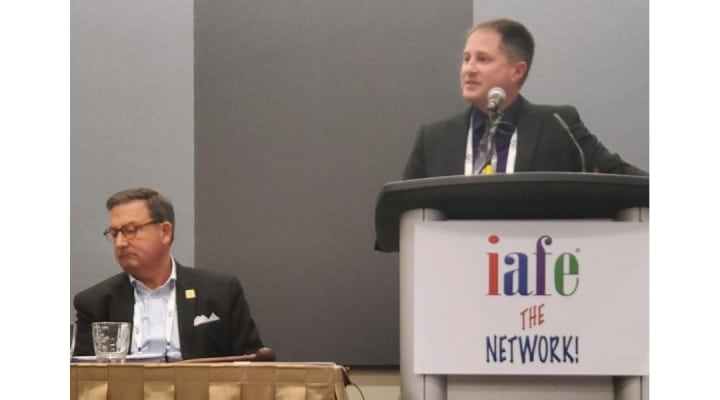 Jeremy Parsons of the Clay County Fair in Spencer, Iowa, was named 2022 chairman of the International Association of Fairs and Expositions (IAFE) during the business meeting at the 2021 IAFE Convention & Trade Show. (Courtesy Photo)

SAN ANTONIO, TEXAS — Jeremy Parsons of the Clay County Fair in Spencer, Iowa, was named 2022 chairman of the International Association of Fairs and Expositions (IAFE) during the business meeting at the 2021 IAFE Convention & Trade Show. The Convention took place Nov. 28-Dec. 1 at the Henry B. Gonzalez Convention Center in San Antonio, Texas.

Parsons will serve in this international leadership role for 2022, spearheading the direction of the organization, which currently has more than 1,500 fairs and affiliated organizations worldwide.

He becomes only the sixth Iowan to serve as the chair of the IAFE, an organization with roots dating back over a century. He joins former Clay County Fair manager Myles Johnson, who served as chairman in 1990, and four managers of the Iowa State Fair (A.R. Corey, Lloyd Cunningham, Marion Lucas, and Gary Slater).

Parsons’ nearly 30 years of fair experience, which started when he was a teenager, has included time as a volunteer at the Decatur County Fair in Leon, Iowa, and as a seasonal employee at the Iowa State Fair in Des Moines and Missouri State Fair in Sedalia. After spending 11 years as a high school teacher and coach at Newtown-Harris High School in Newtown, Mo., he served as executive director of the Missouri State Fair Foundation before being named CEO/manager of the Clay County Fair in 2011.

His responsibilities at “The World’s Greatest County Fair” include leading all aspects of the year-round operation of the 240-acre Clay County Fair & Events Center, orchestrating details for the annual fair and hundreds of non-fair events, and overseeing 12 full-time employees.

A passionate advocate for the fair industry and education, Parsons is involved in several industry organizations, including the IAFE. He graduated from the Institute of Fair Management in 2015 and received his Certified Fair Executive status in 2017. He is a past president of the Mid-West Fairs Association.

Parsons is heavily involved in his community, currently serving as a member of the Spencer Community School Board of Education. He is also past president of the Spencer Chamber of Commerce and the Clay County Convention & Visitors Bureau.

He has four priorities in life, which he attempts to keep in the proper order – faith, family, the Chicago Cubs, and fairs. He and his wife Kelsi have three sons (Creighton, Silas, and Milo) and are active members of Spencer First Baptist Church.

The International Association of Fairs and Expositions (IAFE), based in Springfield, Mo., is a voluntary, nonprofit corporation, serving state, provincial, regional, and county agricultural fairs, shows, exhibitions, and expositions. Its associate members include state and provincial associations of fairs, non-agricultural expositions and festivals, associations, corporations, and individuals engaged in providing products and services to its members, all of whom are interested in the improvement of fairs, shows, expositions, and allied fields.