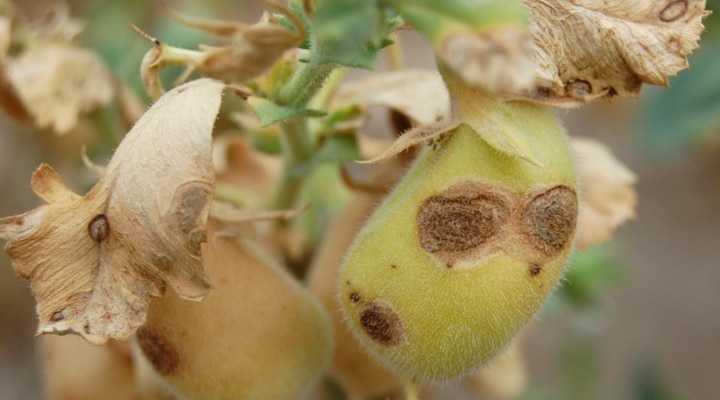 SCOTTSBLUFF, Neb. — Interest in chickpea production in Nebraska has ebbed and flowed over the last 20 years. Beginning about 2000 chickpeas, also known as garbanzo beans, became a popular crop to rotate into production systems, particularly in Box Butte County.

In 2005-06 acreage of the new crop approached 10,000 acres planted. However, due almost exclusively to the appearance of a disease called Ascochyta blight, interest in the crop dropped drastically. This devastating disease, caused by a fungus, Ascochyta rabiei, is considered to be the most important yield limiting factor worldwide, and is present everywhere chickpeas are grown.

Over the last three years, interest in planting chickpeas has been on the upswing due to increasing public demand and its usage in salad bars (before COVID) and food products such as humus. Although its planted acreage in Nebraska was projected to exceed 12,000 in 2020 (it was about 12,200 in 2018), the disease is still an issue that must be addressed to achieve successful production and economic returns for the growers. Until this disease is effectively controlled, or management strategies are recognized, production acreage in Nebraska will likely remain sporadic.

Managing this disease has historically been very difficult. Under cool, wet conditions, the pathogen is very aggressive and unbelievably destructive. Genetic resistance will ultimately be the most efficient method for disease management, but producing new disease-resistant cultivars adapted to this region is a slow process.

Several fungicides have also been available, but they are expensive, and populations of the fungal pathogen in Nebraska have developed resistance to the strobilurin class of fungicides such as Quadris and Headline. Furthermore, producers are reluctant to include additional high cost inputs into their farming systems if it can be avoided.

New chemical products are gaining in popularity that are less expensive than standard fungicides, environmentnally friendly, commercially available, and can be utilized by organic producers. They are also highly unlikely to induce resistance to the plant pathogens. Over the last decade in Scottsbluff, we have successfully demonstrated the utilization of several of these products (SaniDate and OxiDate) for managing bacterial diseases in dry beans, and new products are being released seemingly each year.

In an effort to resolve these issues, we have recently been awarded a U.S. Department of Agriculture (USDA) Specialty Crops Block Grant issued through the Nebraska Department of Agriculture. A planned three-year study will begin in 2021 with the purpose of  evaluating these new products and their ability to effectively manage the disease until cultivars with acceptable genetic resistance are commercially available.

Our primary objective with this study is to answer the question on whether any of these new chemicals will have the same positive effect on protecting other crops (chickpeas in this case) against fungal diseases in the same manner as they have had previously with bacterial diseases in dry beans.

Even if new, high-yielding resistant cultivars are produced, previous research with dry bean breeder, Carlos Urrea, determined that neither technique would properly manage the disease alone. It is still highly likely that both chemical applications coupled with genetic resistance will be necessary to completely and properly handle this disease. We are also attempting to identify the best-performing chemical products that reduce disease development and improve yields.

Northeast Nebraska farmer to be featured on Women in Ag webcast
February 25, 2021

Northeast Nebraska farmer to be featured on Women in Ag webcast
February 25, 2021