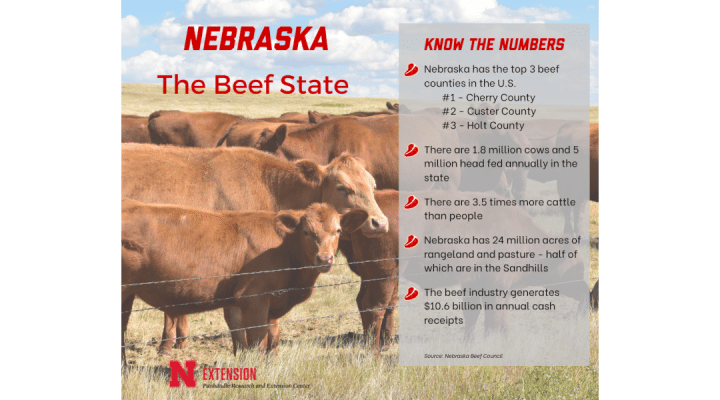 Nebraska is called the beef state because every segment of the beef industry is represented, from cow-calf to stockers and backgrounders to feedlots and processing facilities. (Photo: Panhandle Research and Extension Center, University of Nebraska-Lincoln)

LINCOLN, Neb. — Why is Nebraska called the beef state? It’s simple, agriculture is the number one industry where cattle production represents the largest segment. Beef production is the engine that powers the state’s economy. Nebraska is unique and has every segment of the beef industry represented starting with cow-calf to stockers and backgrounders to feedlots and lastly processing facilities. There are even dairies which is often overlooked but does play a role in the commercial beef supply. Currently, there are 6.8 million head of cattle in the state which ranks Nebraska second in the nation.

There are many agriculture commodities grown in the state, as well as an abundance of natural resources. There are nearly 23 million acres of rangeland and pastureland in Nebraska – half of which are in the Sandhills. More than one billion bushels of corn is produced annually. Having access to that many acres and growing that much corn allows for a lot of cattle to be fed in the state. In fact, Nebraska has so many cattle, they outnumber people in Nebraska, four to one!

Raising beef is a complex process, but throughout the entire journey, the beef community shares a commitment to raising cattle in a safe, humane and environmentally sustainable way.

The Nebraska economy depends on agriculture, it’s what drives it. The beef industry generates $10.6 billion in annual cash receipts. In 2020, Nebraska’s agricultural exports totaled $7.1 billion, which translates into $7.4 billion in additional economic activity. Agriculture also helps the economy by providing jobs, one in four Nebraska residents are employed by agriculture related businesses.

Nebraska beef is known for its flavor, tenderness, and quality. Farmers and ranchers take great pride in producing a product that is known worldwide. When it comes to the nutritional benefits of beef, beef’s 10 essential nutrients including protein, zinc, iron and B vitamins, support a heart-healthy lifestyle. The nutrients in lean beef provide our bodies with the strength to thrive and grow. In fact, one 3 oz cooked serving of beef provides 50% of your Daily Value (25 grams) of protein in around 150 calories, less than 10 grams of total fat and less than 95 mg of cholesterol.

To learn more about Beef production in Nebraska or the nutritional benefits of beef, visit nebeef.org.