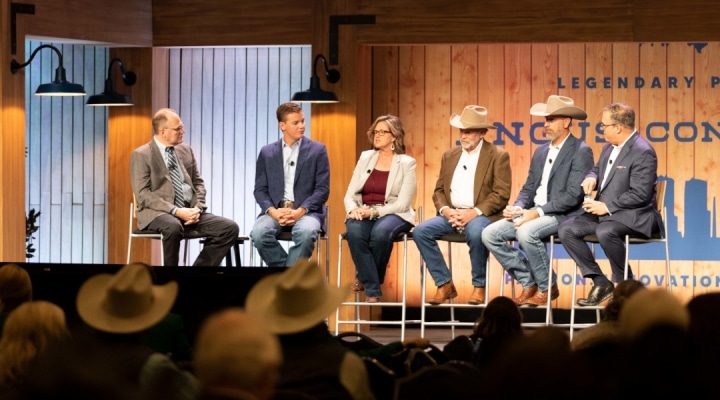 ST. JOSEPH, Mo. — Passion. It’s what drives people to chase big dreams, to push through the nitty gritty, to accept the lows of defeat and savor the highs of achieving success. It’s the reason why cattlemen do what they do.

In every sector of the beef business, there are people with passion for their way of life. As a part of the 2021 National Angus Convention and Trade Show, a panel of those professionals shared stories of dedication, hardships and celebratory moments in their lives. Speakers included moderator Mark McCully, American Angus Association chief executive officer, and five panelists – Debbie Lyons-Blythe, owner of Blythe Family Farms; Bodey Langford, owner of Langford Cattle Company; Shane Tiffany, co-owner of Tiffany Cattle Company; Curtis Osmond, president of III Forks Prime Steakhouse and Silver Fox Steakhouse; and Josh Jasper, foundation director of the National Junior Angus Board.

Jasper spoke about his auctioneer dreams, made possible by his involvement in the junior program and life lessons learned from continuous trips to sale barns with his grandparents.

“I remember just sitting down and watching those guys just sing their chants on sale day, just being like, wow, I wish I could wear that silver belly hat up there, hit that gavel down and be the voice of the sale,” said Jasper. “So going from watching those guys to eventually working with them. Just a couple months ago, I got the chance to finally say, ‘Sold it your way, A-rod,’ and that was one of the coolest moments I’ve had. I’ll forever cherish that moment.”

Osmond said he values the relationship between the producer and consumer, respects the dedication poured into the product he serves and aims to relay that message to his customers.

“I think it’s really important for you to understand that we understand what your passion is,” said Osmond. “We know that what we’re representing each and every night is the fruit of your passion, of your hard work. We want to represent that in the best light possible.”

Any path taken will surely include obstacles and Osmond said those challenges force people to band together and persevere.

“See when family faces adversity, you know what they do,” said Osmond. “They rally, they get together, they pick themselves up and they continue to push forward, knowing it’s the passion for what we do that keeps us going.”

Lyons-Blythe described the challenge her family faced when her youngest son needed a liver transplant, then battled lymphoma a few years later. She fought back tears as she expressed how the Angus family showed up for her family.

“My son, Tyler, had a major health crisis seven years ago, and our Angus family sent messages, phone calls, prayers and you helped us raise money for our charity to increase awareness for organ donation,” said Lyons-Blythe. “Then a year ago, Tyler got lymphoma and you did it again. You helped us feel God with us that whole time. It’s family, it’s you all, you mean so much to me.”

Langford told attendees about a childhood memory at his grandfather’s Alabama home. Surrounded by Angus herd bulls, he recalled how they would line up, single file, and low as they paraded around the pasture. Like his grandfather, Langford built his home in Texas in the middle of his bull pasture and replicates those memories with his family.

“I had my little two-and-a-half-year-old grandson at the house just a month or two ago,” said Langford. “We were sitting in the living room and he said, ‘Grandpa, what’s that sound?’ I said, ‘Son, that’s just those little Angus bull’s lowing around, walking and doing their thing.’ So maybe that’s the first sound he’ll ever remember and record just like I did when I was his age.” Tiffany explained the unique way he and his brother got their start in the feedlot business. After he accepted a corporate position and his brother as a ranch manager, an unsuspected source approached them with a unique opportunity.

“The man that owned the feedlot our dad managed had, unbeknownst to us, been following our careers and keeping tabs on us and how we were conducting ourselves and things like that,” said Tiffany. “Out of the blue in 2007, we got a call that went something like this, ‘Would you guys consider coming home, buying the feed lot and being part of my legacy.’”

The brothers, unsure of their futures if they accepted, had a decision to make.

“We said ‘Man, we’d love to, but we don’t have any money,’” said Tiffany. “He said, ‘That’s fine, I’ll finance you.’ So we came back and we ended up with the opportunity to buy in.”

With this opportunity, Tiffany not only received the chance to live out his dream, but now passes on his knowledge to the next generation and watches them carve their own path.

“I love giving them opportunities to take ownership in their own different divisions, teaching them what I was taught, and then to empower them to go on and do great things in this industry,” said Tiffany. “I’m passionate about producing the best protein source in the world.”

At the root, Angus cattle serve as more than means to make a living or just a hobby, said Lyons-Blythe. Passion for the industry, for raising beef and for black-hided cattle is embedded in core values.

“Foundationally, it’s all about our kids,” said Lyons-Blythe. “It’s the legacy of ranching and farming. It’s passing it on to the next generation. It’s learning more about ourselves, about the land, the animals and the people.”

The 2021 National Angus Convention and Trade Show was held Nov. 6-8, 2021 in Fort Worth, Texas. For news and information about NACTS, visit www.angusconvention.com.