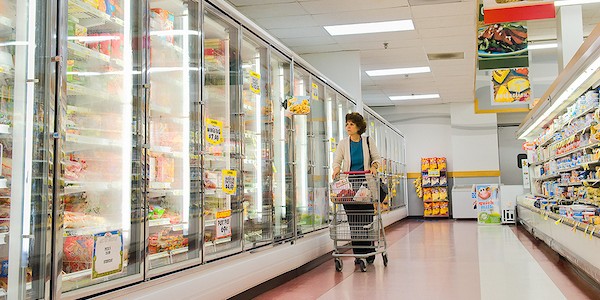 Bringing higher rates of unemployment and poverty, the pandemic has also pushed more people into a struggle to buy the basics, including food. (University of Illinois ACES)

COLUMBUS, Ohio — Bringing higher rates of unemployment and poverty, the pandemic has also pushed more people into a struggle to buy the basics, including food.

Grocery store food prices have gone up only about 5% since January 2019, but with so many people out of work, food banks have seen a surge in demand, said Zoë Plakias, an assistant professor of agricultural, environmental, and development economics at The Ohio State University College of Food, Agricultural, and Environmental Sciences (CFAES).

While facing an increasing demand, food banks have also received fewer food donations from grocery stores that give their excess products. When stores can’t keep their shelves stocked, there can be less available for donation, Plakias said.

With many incomes reduced during the pandemic, more people are taking advantage of the Supplemental Nutrition Assistance Program (SNAP), previously known as food stamps, and new food aid programs have been started.

But that’s enough to meet the need, Plakias said.

“Ultimately, all of these food programs are Band-Aids,” she said. “What people need is regular, steady income. This is a poverty problem. This is not a food supply problem. We have enough food. The problem is people not having the income to purchase that food.”

Food insecurity was one of the topics Plakias discussed Nov. 13 during the 2020 Agricultural Policy and Outlook Conference hosted by the CFAES Department of Agricultural, Environmental, and Development Economics. She was among a slate of speakers over the four-day conference who offered projections on food-spending, farm prices and income, and the overall economy in 2021.

Before the pandemic began, 10.5% of U.S. households were food insecure at some point during 2019, meaning they lacked enough food for an active, healthy life for all members of their household.

In July, nearly 20% of households surveyed nationally said they had children in the home who were not eating enough sometime or often in the past week because they could not afford food. A separate national survey in June showed that 9.7% of those who responded said they couldn’t afford to buy enough food in the past week.

The pandemic has led to more people applying for SNAP. However, for some, it can be a challenge finding out about the program or signing up for it because they live in rural areas where internet access is unreliable or unavailable, Plakias said.

“That’s a huge issue,” she said. “I hope that COVID-19 is catalyzing interest and support for increasing internet access to rural areas.”

The challenge of affording food extends well beyond the United States.

By the end of 2020, an estimated 270 million people worldwide are expected to be food insecure, according to estimates from The United Nation’s World Food Program. That’s an 82% increase compared to the level of food insecurity before the pandemic began, said Ian Sheldon, an agricultural economics professor and Andersons Chair of Agricultural Marketing, Trade, and Policy at CFAES.

“It still shocks me that we have food insecurity in the U.S., where we have one of the highest per capita incomes in the world. You’d think we’d have put in place a safety net sufficient to ensure everyone has enough food.”

To view video recordings of all conference speakers, visit go.osu.edu/aedeconference.