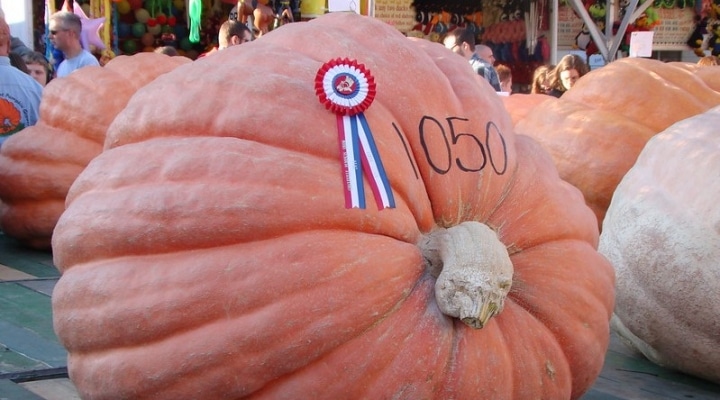 One of the fair's most beloved events is the giant pumpkin contest. (Stock photo via VasenkaPhotography, Flickr/Creative Commons)

BOSTON (AP) — The coronavirus pandemic has forced the cancellation of a more than 200-year-old Massachusetts agricultural fair for just the third time in its history, organizers said Wednesday.

The Essex Agricultural Society, the organization that runs the Topsfield Fair that was scheduled for Oct. 2-12 this year, said the decision was made for the safety of fairgoers, staff, volunteers, vendors, exhibitors and sponsors.

“We understand the impact of this decision for small businesses, family farms, competitors, and exhibitors and the disappointment of hundreds of thousands of people who look forward to the Topsfield Fair each year,” General Manager James O’Brien said in a statement on the fair’s website. “As our scheduled opening day got closer it became clear that we could not create a fun, safe, and enjoyable experience that fairgoers have come to expect and deserve.”

The fair, which began in 1818 and bills itself as America’s oldest, has been canceled twice before — in 1918 because of the worldwide flu pandemic, and for three years during World War II.

One of the fair’s most beloved events is the giant pumpkin contest.