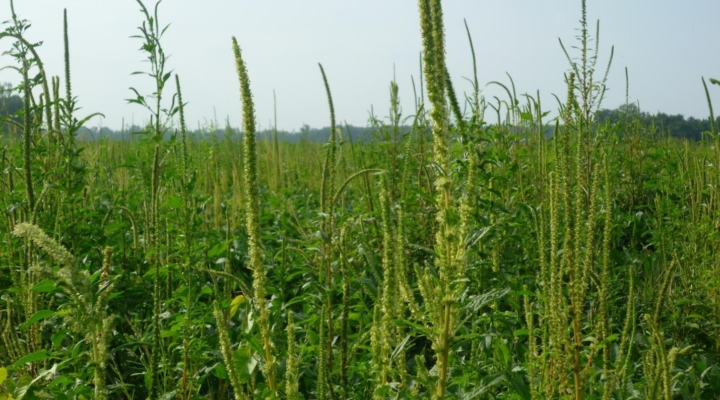 URBANA, Ill. — Corn, soybean, and cotton farmers shudder at the thought of Palmer amaranth invading their fields. The aggressive cousin of waterhemp – itself a formidable adversary – grows extremely rapidly, produces hundreds of thousands of seeds per plant, and is resistant to multiple classes of herbicides, including glyphosate.

Palmer’s resistance to PPO-inhibiting herbicides, a group of chemicals that disrupt chlorophyll synthesis, is especially problematic with glyphosate out of the picture. Farmers had been turning to PPO-inhibitors as an effective alternative, until resistance was discovered in waterhemp in 2001 and in Palmer in 2011.

Pat Tranel from the University of Illinois has been working to understand the mechanisms of resistance to PPO-inhibitors for years, and was the first to discover key mutations in both weed species. Now, in two new studies, he goes farther to explain Palmer’s evil genius.

“We knew Palmer had the same molecular mechanism as waterhemp to resist PPO-inhibitors, a genetic mutation known as the gly-210 deletion, and at least one more. Now we know that it evolved the gly-210 deletion independently, rather than picking it up through hybridization with waterhemp,” says Tranel, associate head and professor of molecular weed science in the Department of Crop Sciences at U of I.

This is important in two ways. It’s good news that scientists aren’t finding evidence of hybridization between the two superweeds, at least not so far. But the fact that Palmer evolved the same mutation independently, and at least one more to boot, shows just how wily the weed is.

Tranel and his team determined the evolutionary origins of the gly-210 mutation by looking at the genetics of resistant plants of both species that were growing together in a Kentucky field. Being in close proximity for several years should have provided opportunity for hybridization, if it was going to happen.

“We know from lab experiments that they are capable of hybridizing, so the fact that it’s not happening in the field is a good thing. The more they can and do hybridize, the more concerns we’d have,” Tranel says.

Only about a third of the Palmer plants in the Kentucky field had the gly-210 deletion. The rest were using a different mutation – an arginine substitution – to ward off PPO-inhibitor damage.

“The finding that this population of Palmer has two different mutations is a concern because if you look forward in the future, Palmer is well positioned to deal with future PPO chemistries. It can use whichever is more effective against a new PPO.

“It’s also well positioned to combine the two mutations to create a double mutant, with both mutations on the same copy of the chromosome. Chemistry designed to kill plants with the gly-210 deletion won’t be able to kill double mutants,” Tranel says. “In my opinion, it’s just a matter of time until we see double mutants in the field.”

Tranel’s second new study explains why Palmer amaranth took a decade longer than waterhemp to develop the gly-210 deletion, and reveals another diabolical truth about the species: Palmer amaranth appears to be naturally tolerant to post-emergence PPO-inhibitor application.

It has long been recognized that the timing of post-emergence PPO application is especially critical for Palmer amaranth, relative to waterhemp. If Palmer plants aren’t sprayed before they reach about 4 inches, it’s all over.

“If you wait too long, you miss ’em. And too long can be a matter of a single day because Palmer grows so fast. It can go from a 4-inch plant where you could control it to a 6-inch plant literally in a day,” Tranel says.

For Tranel, the pattern suggests a natural tolerance to post-emergence PPO-inhibitors. Tolerance describes the ability of a species to handle a substance, in this case PPO herbicides. Resistance, on the other hand, happens at the population level; localized populations of the species evolve mutations in response to repeated exposure to the substance. For example, corn is tolerant to atrazine. It can handle being sprayed and doesn’t need to evolve a mutation to handle it in a particular population.

The idea is that Palmer amaranth has a natural tolerance to PPO inhibitors and didn’t need to develop resistance. That’s why it took longer to evolve the gly-210 mutation. But, until now, no one had specifically studied Palmer’s tolerance to the chemistry before.

“We found that ‘sensitive’ Palmer plants without the mutation survived just as well as resistant waterhemp when sprayed post-emergence,” Tranel says.

On the other hand, the research team found that pre-emergence formulations effectively controlled both species.

“The difference in tolerance between Palmer and waterhemp goes away at the pre-emergence stage,” Tranel says. “Ultimately, that’s the take-home message here. If you’re dealing with these weeds, especially Palmer amaranth, and you want to incorporate a PPO-inhibitor as an alternative effective mode of action, you’ll have much better luck if you use it in a pre-emergence application.”