Home / Minnesota / Palmer amaranth is in my field, now what? 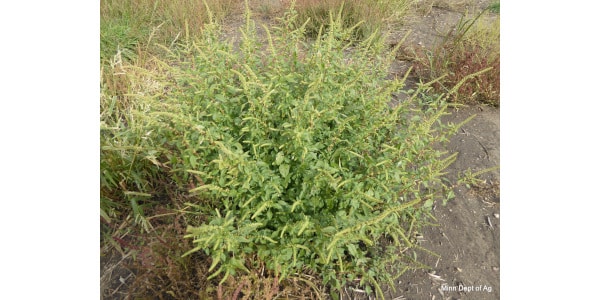 A Palmer amaranth plant. (Courtesy of Minnesota Department of Agriculture)

ST. PAUL — Palmer amaranth is a national example of how damaging invasive species can be. Estimates of heavy yield losses in row crops have been staggering in states that have widespread Palmer populations. These yield losses have led to fear and anxiety in agricultural communities that have not experienced infestations. This increased awareness of a potential problem creates a situation where farmers are actively on the lookout for any suspect plants in their fields, enabling them to be proactive in the identification and elimination of this weed on their land.

In 2016, after years of reports that Palmer amaranth was moving into the Upper Midwest from its native origin of northwestern Mexico and the southeastern United States, infestations were confirmed in southwestern Minnesota. Over 30 landowners were impacted by contaminated seed sown for their newly contracted Conservation Reserve Program (CRP) acres. The Minnesota Department of Agriculture (MDA) responded to the situation quickly and began assisting farmers with eradication. Since then, Palmer has been found in 11 counties within the state and that number is expected to increase.

The MDA’s experience working with farmers impacted by this troublesome species over the past five years has shown the critical role they provide by scouting, monitoring, and treating new and current Palmer amaranth infestations. In fact, almost all of Minnesota’s confirmed Palmer reports were initiated by a farmer or their crop consultant. Minnesota’s success with Palmer eradication resulted from cooperation with farmers. Not a single farmer wanted this weed on their property, and every farmer emphasized weed control in their production operations. Palmer amaranth’s arrival in Minnesota has undoubtably changed weed management strategies for many farmers. They proved they are up to the task.

When all of these issues are combined, it’s not difficult to see the negative impact this weed could have on production fields in Minnesota if not managed correctly.

Despite the threats Palmer amaranth poses to farmers, there is hope for the future. Minnesota has been aggressively dealing with Palmer amaranth since it first appeared in the state in 2016. Our experiences thus far have shown that with persistent management this troublesome plant can be controlled. To date, only one site out of over 40 required multiple years of treatments. The MDA, University of Minnesota Extension, farmers, and landowners showed that it is possible to manage Palmer infestations so that crop production is not severely impacted. But to be successful, Minnesota farmers need to remain extra vigilant and react quickly to any emerging Palmer threats on their lands.

So, what can a farmer or a landowner do to keep Palmer amaranth from becoming a major crop pest?

Understanding pathways is critical to stopping the movement of Palmer amaranth into and within Minnesota. The MDA identified several pathways where Palmer amaranth could potentially enter the state. Any agricultural product that is contaminated with Palmer amaranth seed can be an infestation source. Through MDA’s efforts, Palmer amaranth was documented in planting seed, screenings from seed and grain, livestock feed, and manure. Livestock bedding, hay, mulch, and other materials that are shipped into Minnesota from states where Palmer is a common weed could also be an infestation source. Other probable pathways to consider are any machinery or vehicles that are used on production fields. Custom combines and other machines that have been utilized in other states should be cleaned before they are used on your fields. The point here is to become aware of the source of any products, seed, manure, or the machinery that is being used in your operations and on your land. Preventing Palmer from establishing is the easiest and most cost-effective management option.

If Palmer is confirmed on your property, the MDA, in cooperation with U of M Extension, can work with you to develop a management plan moving forward. The sooner a management plan is established and implemented, the better the outcome. Farmers who have been impacted by this pest experienced the benefit of immediate action and contingency planning.

Whether you are a commercial or organic producer, there are weed management strategies that can be applied to prevent Palmer amaranth establishment. These strategies will not only help with Palmer amaranth, but other species like waterhemp, velvetleaf, Kochia, and giant ragweed. With increasing herbicide resistance for a variety of weed species, implementing a successful weed management plan is imperative to achieving your harvest goals. If small weed problems escalate quickly, they turn into large expensive weed problems. The sooner you deal with serious weeds like Palmer amaranth, the better your long-term cropping strategy will be.

When is the best time to stop irrigating for the season?

Be on the lookout for Palmer amaranth
September 16, 2021