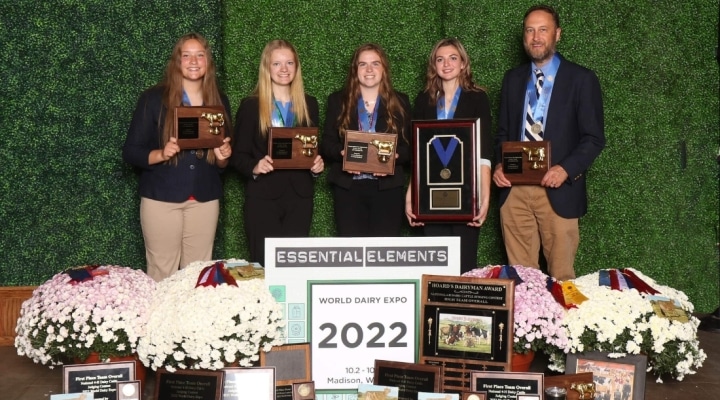 Haag was ranked the overall top-performing individual in the contest. She is the sixth Pennsylvanian to win this honor, joining James Miller in 1962, Marvin Bashore in 1966, Cathy Pavelski Bewley in 1991, Rachael Kilgore Sattazahn in 2001 and Aaron Horst in 2005. Sattazahn went on to become a Berks County judging coach, eventually coaching Haag.

As a team, Pennsylvania was first for overall placing and Jerseys. They ranked second in oral reasons, Brown Swiss and Guernseys, third for Ayrshires, and fifth for Holsteins.

As a result of its victory, the team has qualified to represent the United States this summer at the International Dairy Judging Contest in Glasgow, Scotland. The team members expressed gratitude for all of their coaches in their counties, for the dairy farms that hosted practices throughout the year and for the financial support provided by the Pennsylvania Dairymen’s Association.

According to the event website, the World Dairy Expo serves as the meeting place of the global dairy industry, bringing together the latest in dairy innovation and the best cattle in North America.

Administered in Pennsylvania by Penn State Extension, 4-H is a nonformal educational youth-development program of the United States Department of Agriculture that helps young people develop knowledge and skills to become capable, caring and contributing citizens. To find your local program, visit the Penn State Extension website at https://extension.psu.edu/programs/4-H.

Land-use webinar to focus on planning to protect natural assets