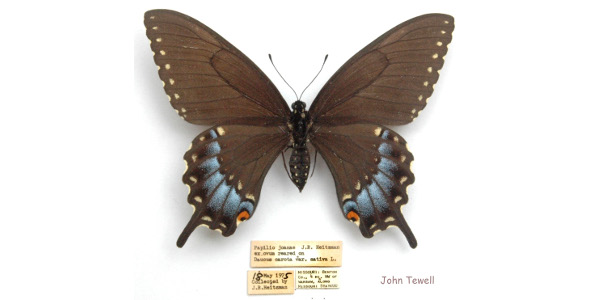 “The Ozark Woodland Swallowtail (OWS) is much less common and could even be considered rare in the Ozarks,” said McGowan.

This illusive butterfly, as its name implies, is a woodland species that also uses woodland species of carrot family plants as hosts for their larvae. Populations of this butterfly are known to exist but have not been recorded for many years.

Beginning in 2018, McGowan, along with a group from the Dr. Bill Roston Native Butterfly House, have started scouting for this species.

Trips have been made to a site near Warsaw (a former confirmed population site), and other trips will be made to other select sites in the Ozarks.

“The Ozark Woodland Swallowtail is nearly identical in appearance to the black swallowtail, so there is much to learn not only on population locations but also identification and habitat,” said McGowan.

OWS was originally discovered in the Ozarks in the 1970s by Richard H. Heitzman who named the butterfly after his wife Joan.

Other populations in the area have been recorded since the original finding, but work is needed to find out what the population density could be at present.

The species is currently on the Missouri Department of Conservation’s ‘Species of Concern’ list, which is an additional indication that intervention is needed to study this population.

This work is only beginning. Information collected will be used to help the Missouri Department of Conservation track populations, but will also be used to educate the public about this special butterfly species.

Preparing for disasters: Take it one step at a time
September 20, 2021

Agriculture education on the move
September 20, 2021