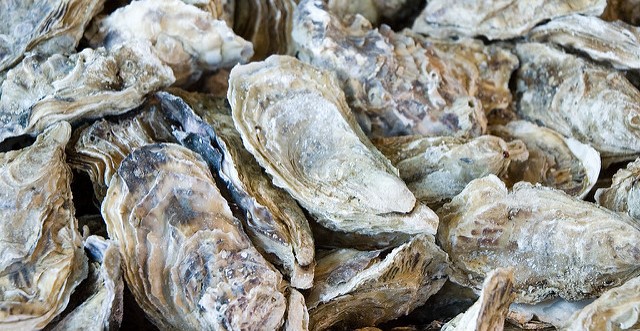 Instead of being harvested for catch, the close-in oyster reefs create a barrier to reduce the velocity of the waves crashing against the coast. (Paul Asman and Jill Lenoble, Flickr/Creative Commons)

GALVESTON, Texas (AP) — The Texas Parks & Wildlife Department in the past 10 years has built more than 400 acres of oyster reef off the coast — multimillion dollar projects intended to jump start the harvest of oysters, particularly after hurricanes and drought devastated the resource.

Now, Texas could start approving and funding plans to build reefs closer to the shoreline, which scientists argue would help combat coastal erosion.

The Galveston County Daily News reports such projects have been done in Louisiana and North Carolina, and on a smaller scale by nonprofit groups locally, such as the Galveston Bay Foundation, which in 2014 started building an oyster reef in Sweetwater Preserve in Galveston.

University research groups and some states are increasingly taking on similar projects on a larger scale, said Bill Rodney, a coastal ecologist specializing in oyster restoration with the Texas Parks & Wildlife Department. Louisiana, for instance, is testing a 3-mile living shoreline in St. Bernard Parish.

And in light of the 2010 Deepwater Horizon oil spill, there are proposals under review in Texas for intertidal shoreline oyster reef restoration projects, Rodney said. Instead of being harvested for catch, the close-in oyster reefs create a barrier to reduce the velocity of the waves crashing against the coast, Rodney said. Rodney was not aware of any specific project that had already received funding, he said.

The Texas Parks & Wildlife Department in the past 10 years has worked on restoration projects to help public oyster reefs destroyed by Hurricane Ike in 2008, for the benefit of commercial fishermen and oyster consumers, Rodney said. Those reefs have been sub-tidal, meaning they’re farther from the shoreline and in deeper waters, he said.

The vast majority of the reefs have been built in Galveston Bay, Rodney said.

“We’ve mostly been restoring for the commercial benefits and to a lesser extent for the ecological benefits of the habitat,” Rodney said. “We’ve really kind of stayed away from shoreline protection projects, but we’re interested in moving in that direction.”

Scientists are studying the benefits of oyster reefs along shorelines around the country. University researchers in North Carolina have built oyster reefs to test how well they stand in high wave energy areas and whether those reefs can slow erosion, said Antonio Rodriguez, a professor at the University of North Carolina Institute of Marine Sciences.

“The reef acts like a breakwater, the waves will break on the reef instead and protect softer salt marsh on the coast,” Rodriguez said.

Volunteers and foundation employees placed the oyster shells parallel to the wave-break off the beach where oyster larvae in the water attached and began growing, she said.

Like many parts of Galveston Island, the foundation’s property on Sweetwater Preserve has sustained severe erosion, she said. The oyster reef project is part of larger restoration efforts in which the foundation has planted marsh along the shoreline, Leija said. The reef protects the marsh from further degradation, she said.

The foundation has also taken up oyster reef projects in Anahuac and other properties it owns, Leija said.

Creating living shorelines is something the state is increasingly moving toward, but has unknowns, Rodney said.

“Everyone pretty much agrees there will be ecological benefits, but it’s sort of a new thing in restoration projects so we need to do the projects in order to study them,” Rodney said.